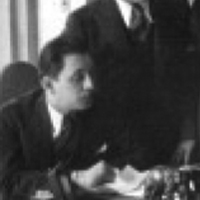 Alexander Olshanetsky (1892–1946) was also among the most prominent and prolific Second Avenue composers and conductors, and one of the musically most sophisticated exemplars of the Yiddish theater. He was born in Odessa, the Ukraine, where he had both a traditional Jewish and a modern Western-oriented gymnasium education. As a boy, he sang in synagogue choirs and began violin studies at the age of six—learning several other instruments as well.

He then played in the Odessa Opera orchestra and toured with them throughout Russia and Siberia, after which he became the choral director for a Russian operetta company.

While in the Russian army as a regimental bandmaster, he traveled to Kharbin, Manchuria, in northeast China, where he encountered a Yiddish theater group whose conductor was Peretz Sandler—later the composer of the famous song “Eli, Eli.”

After touring Siberia, Japan, China, and India with another Russian operetta company, he returned to Kharbin in 1921 to find all Yiddish theater gone.

In 1922 Olshanetsky emigrated to the United States, where his uncle Hyman Meisel (eventually his father-in-law too, when he married his Yiddish actress-singer cousin, Bella Meisel [Mysell]) already lived.

Olshanetsky had some initial involvement with the Yiddish Art Theater and then traveled to Cuba to direct a theater company there. When he returned to New York, he served successively in two Yiddish theaters (the Lenox, in Harlem, and the Liberty, in Brooklyn), before “graduating” to the more prestigious downtown National Theater. And in 1929, after many successful operettas of his own, he rewrote some of the music for Goldfaden’s classic Bar khokhba for its radio debut.

From 1925 on, throughout the 1930s and until his death, Olshanetsky’s name was ubiquitous throughout the Second Avenue world, and his operettas played in nearly all its major theaters. He also became the first musical director of the Concord Hotel.

Some of the most sophisticated cantors of the time considered him among the very best choirmasters in terms of understanding the special sensitivities of cantorial idioms and rhythmic freedom. He wrote a small amount of liturgical music as well—unabashedly theatrical in character and style—which remains mostly unpublished. Olshanetsky had a particular gift for elegant melodic lines and a well-developed dramatic sense. He was able to fashion these elements into vehicles that spoke to popular taste. Joseph Rumshinsky, his senior colleague but also a commercial rival, wrote in his memoirs that Olshanetsky understood innately the musical yearnings of the immigrant Jewish masses and introduced both “dreamy romances” and a perceived Russian Gypsy idiom to the American Yiddish theater. His last operetta was Ale viln khasene hobn (Everyone Wants to Get Married).