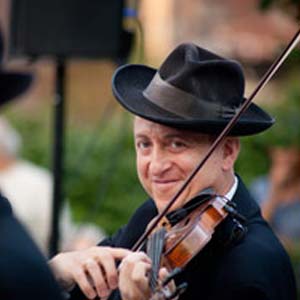 Alex received his Master’s Degree in classical music from the Conservatory of Minsk in Belarus. In 1990, after immigrating to America, Alex studied with Albert Igolnikov of the Chicago Symphony Orchestra. Alex joined Maxwell Street Klezmer Band in 1990 and soon after became its Musical Director and composer.

In 2008, Alex was the featured soloist in the world premiere of Klezmer Rhapsody in Preston Bradley Hall at the Chicago Cultural Center, which was presented again in Symphony Hall in 2014 with Chicago Sinfonietta. In 2015, Alex was featured in Lyric Opera of Chicago’s World Premier Klezmer Opera,The Property. Alex is featured on four of the band’s commercial recordings and has toured with the band nine times in Europe and in Carnegie Hall. Alex is the leader of two Chicago- area community bands and The Junior Klezmer Orchestra. His non-klezmer credits include classical and show orchestras in Chicago including the Chicago Music Consortium and the Bill Porter Orchestra, the Steppenwolf Theater, movie and commercial soundtracks.