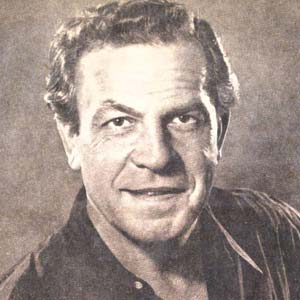 Born in Belz, Galicia. His grandfather, R’ Ira Lokman, was the head gabbai (sexton) for the Belz rabbi. He received a genuine, traditional Jewish education in Vienna, Austria, where his family migrated to when he was six years old. He later learned in a real gymnasium and became a frequent theatre attendee.

In 1919 he was taken in by Itzhak Deutsch into the “Fraye Yidishe Folks-Bine,” where he began to play in episodic roles, but even later he acted in roles not using his own name due to fear of his family. He cut short his acting and became a journalist, a contributor to the German weekly newspaper, “Viner Morgen-Tsaytung (Vienna Morning Newspaper)” (publisher: Robert Striker). In 1926 he again returned to the theatre and opened, together with I. Goldflus in Vienna on Praterstrasse, “Di Yidishe Kinstler Shpile” (Sholom Brin — regisseur and actor, as well as Count Lorca, Minke Deutsch, Ben-Zion Segal, Rachel Weissberg, later Tselniker, Feldbaum, Bashe Liebgold, Itzhak Meyer, Melech Hershkowitz, Berta Rosenberg, Emil Friedes) with Asch’s “Unzer gloybn),” then other plays, comedies and operettas.

W. got to studying singing with the professors Ulianowsky and Fuks and went over to operetta repertoire. He performed from September 1928 until 1930 in Paris, London, South Africa, and further in London, France and Vienna. W. then played in Poland for three years’ time, becoming the darling of the public. In 1927 he guest-starred (together with Etta Topol) in Riga, Lettland

In 1938 he played in Riga, where he performed (together with the prima donna Nina Talina) in “A shpiel in libe” by Oscar Ostroff, “The Folk Singer,” “Kinder fargesen nit (Children Don’t Forget)” by Z. Libin, “A khasene in shtetl (A Wedding in Town),””Eltern un kinder (Parents and Children?)” by Gabel and Lash, “Der nayer yid (The New Jew?)” by Edus (?), and “S’vet zayn got,” from the novel by Michael Zwick, then an entire summer in a summer theatre in Kovno.

In 1940 W. arrived in America and played in America in October 1940 in the Hopkinson Theatre in Siegel’s “Fargesene froyen (Forgotten Women),” then in other theatres; in 1941 he was in Cleveland, and from there he went on the road across the larger provincial cities of America.

In March 1942 W. guest-starred in Chicago’s Douglas Park Theatre, where he staged Siegel’s “A goldener khoylem (A Golden Dream?),” and from then for several months of the upcoming season in Chicago, under the direction of Oscar Ostroff, and later Moshe Nestor. Once again in New York and in the province, until he went to Argentina in 1946, where he guest-starred in Buenos Aires in Teatro Mitre, where he put on Kalmanowitz’s “Home Sweet Home,” “Alts far dir” by Dr. Wolf Herzog, and Moshe Rubin’s “Zing mayn folk.” From there he traveled with the Argentinean-born Yiddish actress Shifra Lerer to Brazil, Uruguay and back to America. In 1949 W. played in the Bronx Art Theatre in the play, “Zayn groyse libe (His Great Love).” In August 1950 he guest-starred (together with Shifra Lerer) in London’s Yiddish folks theatre, then with her went on a tour across Argentina (where he staged “A roman fun ein nakht” by L. Freiman), Uruguay and Brazil. In 1952 W. participated in new York’s Public Theatre in Yablokoff’s production of Ressler’s “Uncle Sam in Israel.” In 1953 he again made a tour (with Shifra Lerer) across Argentina, where he put on the play “Mayn mans kale (My Husband’s Wife),” and from there to Uruguay and Brazil. In 1955 they traveled with a troupe from Argentina to South Africa (technical college theatre), in Johannesburg with the play, “Mayn gliklekhe heym (My Happy Home?)” by H. Hoffenberg, and in March 1956 in the Land of Israel with “Der zingendiker shmid (The Singing Blacksmith)” by H. Hoffenberg, “A doldat oyf urloyb” by H Hoffenberg, and “Mayn meydele,” adapted from H. Kalmanowitz. In 1957 both again guest-starred in Argentina in the “Arkhentine” Theatre, and in 1958 both participated in a tour of the Jewish National Workers’ Union, across America and Canada, where they staged one-acters, concerts of folksongs and songs and duets composed by W.

He was a member of the Hebrew Actors’ Union and is married to the actress Shifra Lerer.