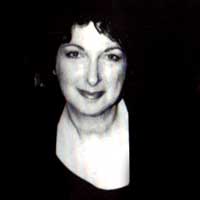 Adrienne Cooper  (September 1, 1946 – December 25, 2011) was a Yiddish singer, musician and activist who was integral to the contemporary revival of klezmer music.

She co-founded Klez Kamp. She was a member of Jews for Racial and Economic Justice’s Board of Directors until the summer of 2011, when she was diagnosed with cancer. Cooper won the Rabbi Marshall T. Meyer Risk Taker Award from the Jews for Racial and Economic Justice in 2010, as well as KlezKanada’s Lifetime Achievement Award in Yiddish Arts and Culture.

She died of adrenal cancer at Roosevelt Hospital in Manhattan on December 25, 2011, aged 65.  She had been diagnosed in July 2011 and underwent surgery in August 2011.

Cooper is survived by her daughter, Sarah Mina Gordon, a vocalist and co-leader of the band “Yiddish Princess”, as well as her mother, two brothers, and her partner, Marilyn Lerner, a pianist-composer.

A Kholem/Dreaming in Yiddish, A Concert in Tribute to Adrienne Cooper has been organized for December 22, 2012, at the Kaye Playhouse at Hunter College in New York CIty. More than 50 Yiddish and klezmer musicians and global colleagues are slated to perform songs that Adrienne taught, sang, and recorded – these include the Klezmatics, Michael Wex, Shura Lipovsky, Dan Kahn, Theresa Tova, Zalme Mlotek, Eleanor Reissa, Wolf Krakowski, Michael Alpert, Michael Winograd, Sarah Gordon.

Internationally recognized as one of this generation’s stellar performers and teachers of Yiddish vocal music, Adrienne Cooper appears on concert, theater, and club stages around the world.  Her singing has been featured on some twenty recordings as well as on film, TV and radio.

From Carnegie Hall to the famed Concertgebouw in Amsterdam, from Moscow to Jerusalem, she has mesmerized audiences and worked at the heart of the klezmer revival scene, defining a wholly original  interpretation of Yiddish song.  She has performed and recorded with The Klezmatics, Frank London’s Klezmer Brass AllStars,  David Krakauer, Zalmen Mlotek,  So-Called, The Three Yiddish Divas,  Marilyn Lerner,  Michael Winograd, Alicia Svigals and Mikveh,  Greg Wall’s Unity Orchestra, Joyce Rosenzweig,The Flying Bulgar Klezmer Band, Kapelye, and performance artists Jenny Romaine and Sara Felder. Cooper is co-creator of groundbreaking works of Yiddish/English music theater – including the critically acclaimed “The Memoir of Gluckl of Hameln (with Jenny Romaine and Frank London/Great Small Works Theater),” “Ghetto Tango” (with Zalmen Mlotek),  and “Esn:  Songs from the Kitchen” (with Lorin Sklamberg and Frank London).  Recent projects include her multi-media concert experience “Every Mother’s Son:  Jewish Songs of War and Peacemaking “ featuring animations by Israeli visual artist Mor Erlich, and composer Marilyn Lerner’s revolutionary bilingual song cycle “Shake My Heart Like a Copper Bell: On the Poetry  of Anna Margolin.”

Cooper’s  inspired innovations in music and culture production have been recognized by awards, grants and commissions from University of Pennsylvania’s Annenberg Center and UCLA, The Jewish Museum,  United Synagogue,  the National Endowment for the Humanities, the National and New York State Endowments on the Arts, the New York Council for the Humanities, and the National Foundation for Jewish Culture.  She is the recipient of Klez Canada’s Lifetime Achievement Award in Yiddish Arts and Culture.

Enchanted: A New Generation of Yiddishsong