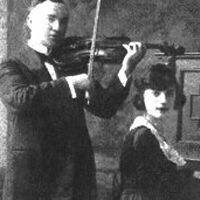 Abe (Abraham) Schwartz (1881–1963) was one of the best known and most recorded Jewish bandmasters—as well as a popular dance-band violinist—in the New York area for many decades. His national and even international fame as what might be called today a klezmer-band leader came from the manifold records of his bands under various names. He emigrated to the United States with his parents in 1899, at the age of eighteen, having spent his youth in Romania, near Bucharest, where he apparently acquired most of his musical skills on his own. After establishing a reputation as a dance-band leader in New York Jewish circles, his initial entrée into the frenetic recording industry occurred when he was engaged to supervise instrumental recording sessions for the Columbia label.

Schwartz’s own recording career was launched around the same time (ca. 1917) with his release of two so-called Russian dance melodies: a sher and a bulgar, played by his Oriental Orchestra. Neither song was Russian, but that exotic perception of “mysterious Russia,” especially of her idealized (and usually undifferentiated) Gypsies, sold in those days—as did anything perceived as “oriental.” Sheet-music publishers and record companies of that era frequently turned to immigrant Jewish musicians to front as authentic carriers of the “new” sounds. Such composers and arrangers—supposedly “fresh from Russia,” though most came from the Ukraine, Belorussia, Galicia, Poland, Romania, or Bessarabia—had the desired cachet as cultural transmitters. Yet many of those Jews had played together with Gypsy, Romanian, and Russian musicians in Europe and had absorbed some of their styles. Still, many of the tunes or styles were simply those played by klezmorim in various parts of eastern Europe—regardless of their pos-sible earlier derivation from host traditions. Schwartz, immediately following his first record, led bands on six other records in 1917.