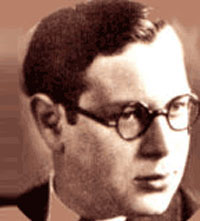 Among the major names associated with the heyday of the American Yiddish theater as songwriters, composers, orchestrators, and conductors, Abraham Ellstein (1907–63) was the only one born in America. He is generally considered one of the “big four of Second Avenue,” along with Sholom Secunda, Joseph Rumshinsky, and Alexander Olshanetsky. Ellstein, though he may be remembered most widely for some of his theatrical “hit” songs, went further than the others in the classical realm, and he considered his theater career only part of his overall artistic contribution.

Ellstein was born on New York’s Lower East Side—one of the most concentrated eastern European Jewish immigrant areas—and as a boy chorister in local synagogues, he sang with some of the most accomplished cantors of the time. He received his early musical training at the Third Street Settlement House, sang in the Metropolitan Opera Children’s Chorus, and began composing while still a young child. He is said to have written a short opera at the age of eight. At only thirteen he conducted a boy choir in John Barrymore’s Broadway production of Richard III.

Ellstein was later awarded a scholarship to The Juilliard School. He studied with Frederick Jacobi, Reuben Goldmark, and Albert Stoessel, after which he made his debut as a theater composer with music for B. Epelboym’s play Gerangl (Struggle), performed by the Vilner Truppe, followed by music for Beynush Steynem’s Baym toyer at the Artef, and Mendel Elkin’s Bum un dreydl. These were the first of thirty-three scores for Yiddish theater, although his subsequent scores were more directly associated with the popular—so-called Second Avenue—vein.

By the 1929–30 season he was engaged as resident composer and music director at Ludwig Satz’s Folk Theater, where he wrote the scores for Zayn vaybs lubovnik (His Wife’s Lover), which was later made into a film, and Az der rebbe vil (When the Rebbe Wants), referred to as a “Hassidic operetta.”

After touring Europe as pianist for actor-singers Dave Lubritsky and Dina Goldberg, Ellstein moved to the Public Theater as resident composer and director for the 1930–31 season, where he wrote the score for the comedy Der berditchever khosn (The Bridegroom from Berdichev), among others.

While on tour with Molly Picon in Europe and South America, as her arranger, accompanist, and conductor, Ellstein wrote new music especially for her performances of Goldfaden’s Shmendrik, and for the “operetta” that once played on Second Avenue, Oy iz dos a meydl (O, What a Girl!). He also added new musical numbers to shows such as Dos tzirkus meydl (The Circus Girl), Hello Molly, and Molly Dolly. His “Hassidic musical revue” was performed in Argentina.

Ellstein also later wrote two film scores—Mamele and Yidn mitn yidl—for Molly Picon, which became “Jewish box-office hits.” Among his many other successful theater scores was A bisl mazl (A Bit of Luck), which featured Menashe Skulnick singing his famous rendition of “The Scotchman from Orchard Street.”

Active for many years in Yiddish radio, Ellstein had regular programs on WEVD, where he presented a variety of Yiddish folk as well as theater music and cantorial selections. Several of his best-known Yiddish theatrical-type songs were written specifically for these radio broadcasts.

He directed a weekly broadcast of liturgical music, The Song of the Synagogue, which featured many of the most beloved cantors with his choral ensemble. Ellstein also wrote and arranged for Broadway, general radio and television, as well as “pop” concerts and even some British and American film shorts.

He was in great demand as a pianist, arranger, and conductor for cantorial concerts and recordings for such great cantors as Yossele Rosenblatt, Leib Glantz, and Mordecai Hershman, and was Yosele Rosenblatt’s pianist for his European and American tours. His cantorial orchestrations in particular are considered the most stylistically classical in that genre. He conducted synagogue choirs for many years, especially for holy day services, for which he wrote a good deal of traditional cantorial-choral music, most of which remains unpublished. He also wrote two modern Sabbath services, commissioned by the Metropolitan Synagogue in New York.

Ellstein always aspired to classical expression, and he seized such opportunities whenever they arose. His 1958 one-act opera, The Thief and the Hangman, with a libretto by Morton Wishengrad (1913–62), based on a Yemenite folktale, was televised nationally on ABC in a program sponsored by the Jewish Theological Seminary for the series Directions, and was then shown to delegates from more than 100 nations at the World Music Congress at the Salzburg Festival.

On a visit to Prague, Ellstein became fascinated with the Golem legend, and while there, he wrote a short piece based on it that he later used as the basis for his opera The Golem.

In addition to The Golem, among Ellstein’s other important classical works are two oratorios: Ode to the King of Kings—televised on CBS and sung subsequently by Jan Peerce—and Redemption, based on the Hanukka story; the Negev Concerto for piano; a piano suite; and Haftorah for violin and piano (with a string orchestra version). Apart from his actual synagogue music, his concert cantorial settings remain popular and are frequently performed.