Thanks to the Jewish holiday of Shavuot and the Torah, Mount Sinai is the best-known mountain in Jewish history. If the husband-and-wife bluegrass team of Eric Lindberg and Doni Zasloff continue their climb through the music world, their Nefesh Mountain band may be the next mountain the Jewish and secular world is buzzing about. Their third full-length recording, “Songs for the Sparrow,” to be released on June 11, may help them in their quest.

“The music of Nefesh Mountain was new to me until last fall when I discovered them on social media and then quickly booked them for a performance at a Covenant Foundation event, and their performance did not disappoint,” reports Harlene Appelman, executive director of the Covenant Foundation, referring to their prestigious annual event—this year held virtually and attended by hundreds in the Jewish world. “The spirit and soul of their music lifted our spirits and added so much joy to our morning.”

Nefesh Mountain arrived on the bluegrass and American music scene in 2014. They have since performed in hundreds of synagogues in the United States and around the world, representing Jewish American culture, tradition, values and spirituality in the world of Americana roots music.

Zasloff and Lindberg spoke with JNS via Zoom from their home in Montclair, N.J., as they await the birth of a child later this month. Their love of music and each other is evident.

“Our challenge was to introduce banjos and bluegrass to the Jewish community over the years.”

‘Driving out the hatred’

Zasloff and Lindberg have been telling this story since their self-titled “Nefesh Mountain” album in 2016, which was followed by “Beneath the Open Sky” in 2018. Over the years, they have collaborated with and forged a kinship with such bluegrass luminaries as Jerry Douglas: (dobro), Sam Bush (mandolin) and Bryan Sutton (guitar). 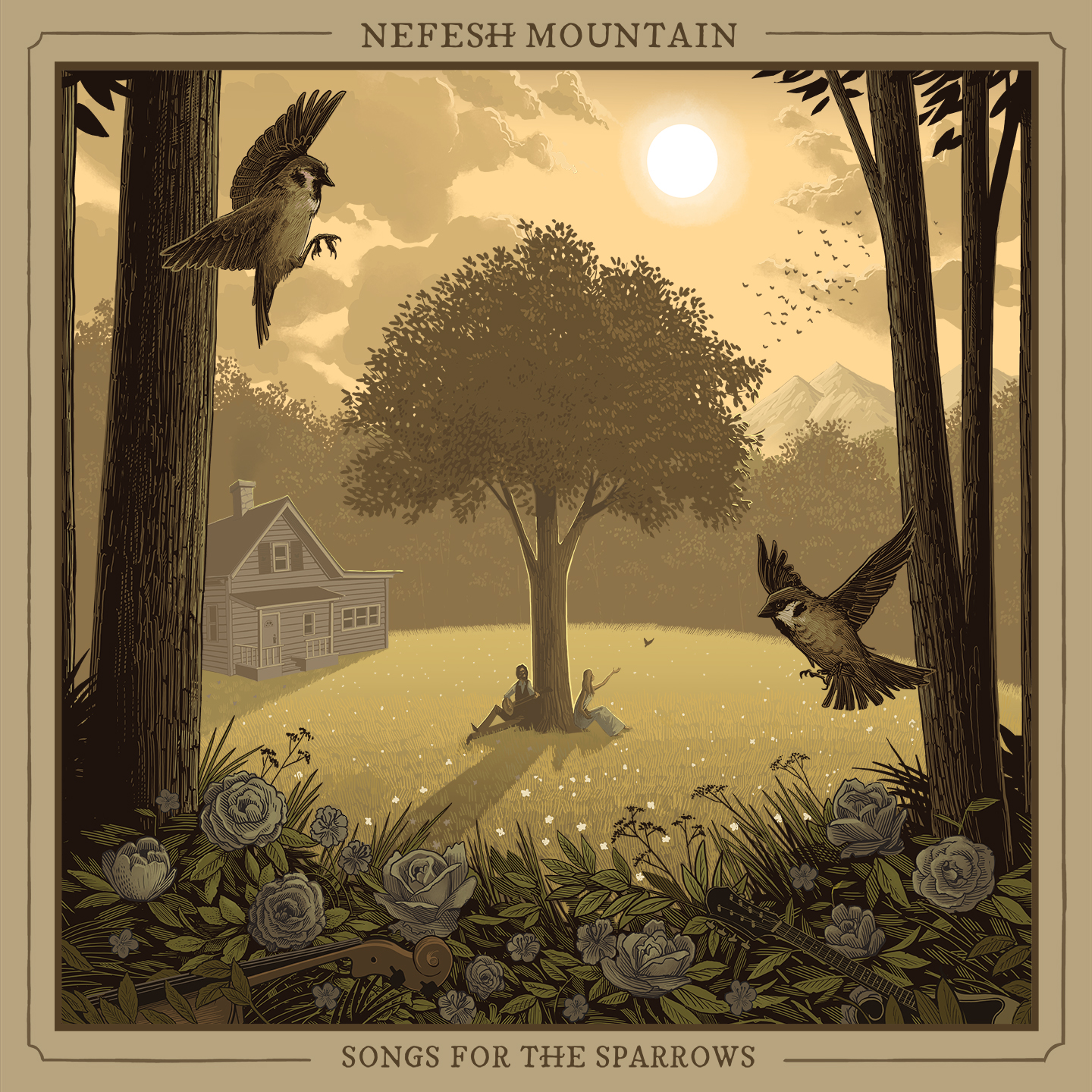 The cover of their third album, “Songs for the Sparrows.” Credit: Courtesy.

“We’re so grateful to have these incredible musicians join us on these albums,” says Zasloff. “For them to throw their hearts and souls into this music and really understand this message of driving out the hatred that still very much exists in the world today, it’s so moving and emotional for us.”

Their third album, “Songs for the Sparrow,” was inspired by an August 2018 family trip to Eastern Europe. “We tracked down the towns where our families are from, and it was devastating to see the destruction of the Holocaust firsthand and to know that we’re not so far removed from that time,” they observed. The two say they were profoundly moved by the trip.

“The album is about love and was to comfort ourselves after the trip to Europe. The album is pouring musical love on hate,” recounts Zasloff. “People are in pain. This is meant to give a big hug. We all need it.”

Zasloff notes that in October, two months after their return from Europe, the mass shooting took place at the Tree of Life*Or L’Simcha Synagogue in Pittsburgh’s Squirrel Hill neighborhood. Eleven Jewish worshippers were shot and killed during Shabbat-morning services and six wounded in the most deadly act of anti-Jewish violence in America. “It flat-lined us,” reports Lindberg. “Being Jewish and part of a minority group is a scary thing.”

It prompted Zasloff and Lindberg to compose the song “Tree of Life,” a prayer and anthem to respect and honor those who were killed, their families and their fellow suffering Jewish communities.

The album’s title, “Songs for the Sparrows” was inspired by both the trip to Eastern Europe and the Pittsburgh shooting. “It comes from us thinking about the many groups of people who are horribly discriminated against in the United States. To us, sparrows represent a small but mighty voice. That’s why we chose to name the album for them—they’re often overlooked, but they’re beautiful and everywhere,” says Zasloff.

The pair is looking forward to resuming touring in September after being away from in-person audiences due to the year-plus-long coronavirus pandemic.

“Now that we’ve had the experience of playing to so many different audiences and hearing people tell us how much our music uplifts them, we know that it’s really working and fulfilling some kind of need,” says Lindberg. “Because of that, this album feels much bolder than previous records.”

Zasloff adds, “This album is very much a celebration; it’s about adventure and endurance and pushing through the difficult times. We’re looking at some painful things in these songs, but it always comes back to the idea of persevering and letting love be your fuel.”