Hob ikh mir a mantl (I had an Overcoat)

I had an Overcoat

Verse 5:
I had a little button, it was old as can be […] And made myself nothing in the very latest style […]

The picturebook Joseph Had a Little Overcoat by Simms Taback uses a creative approach to capture the reader’s attention. By observing the book the reader can anticipate that Joseph has an old overcoat. This is obvious because the picture on the front cover shows Joseph wearing an overcoat that has holes in it. The age group for this book would be kindergarten to second grade.

The book starts with Joseph, the main character, who has an overcoat that he really likes. Soon the overcoat becomes old and worn, but instead of throwing the coat away, he makes it into a jacket. The jacket becomes old and worn also, so he makes a vest out of it. The story continues on the same way, each time making a new article of clothing. The vest becomes a scarf, the scarf becomes a necktie, the necktie becomes a handkerchief, and finally the piece of overcoat becomes so small that the only thing that can be made of it is a button. He places the button on his outfit and it soon falls off and is lost. Joseph is now left with nothing. The moral of the story was that you could always make something out of nothing, which is what happened. This is a good theme to pass along to children.

Joseph never speaks in the book, it was told through narration. This book was published twice, since Simms Taback was unhappy with the first one that he had printed. He felt that the book could have been better. The second time that the book was released it won a Caldecott Award for the illustrations. The style and techniques he used for the illustrations were watercolor, gouache, pencil, ink, and collage. The characters were drawn in a cartoon image, but with a realistic look. One odd thing about the illustration is that there are pictures on the walls that are real people, not cartoons like the rest of the characters in the book. Also, throughout the story there are some newspaper articles that are written in Yiddish. Some of the illustrations show these articles in tact, while others show the newspapers ripped up. Some of the pages have holes in them of certain types of clothing so that when the page is turned it shows the new article of clothing that Joseph had made from the old, worn piece he had previously. This is a great way to hold the attention of the reader. It takes the story to new levels by making it a fun story to read.

Many people have noticed that Joseph looks a lot like Simms Taback. This could be because the story that Taback wrote might be based on how he at some time in his life made something out of nothing. The colors used are bright and exciting. The inside of the book is covered with many different buttons, perhaps one of them is the one that Joseph had in the end of the book. This book would be highly recommended to read to children in the lower grade levels because it has a moral, and is also very interesting. The illustrations make it very captivating for younger readers also. There are many classroom activities that can be incorporated into this book.

Aim: How can we learn about using something old in a new way through a Yiddish folk song?

Summary: Students learn to sing “Hob ikh mir a mantl” and explore the story of the song. 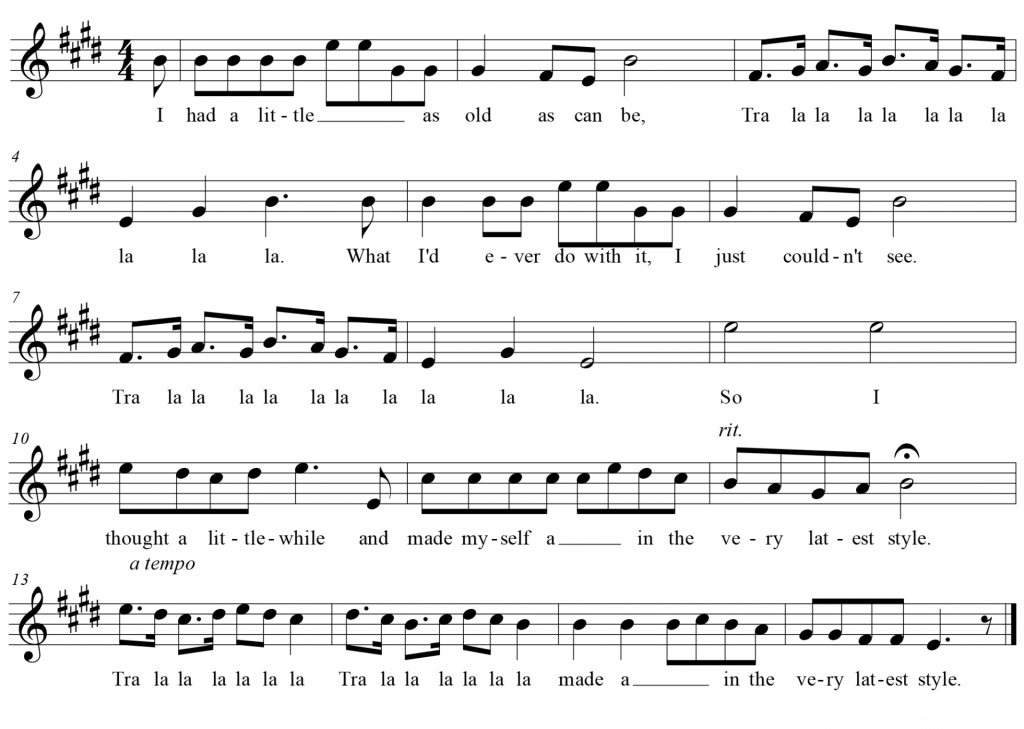