The Milken Archive of Jewish Music Turns 30 in 2020

The Milken Archive of Jewish Music Turns 30 in 2020

2020 marks the 30th anniversary of the Milken Archive’s founding, a milestone we’ll be acknowledging and celebrating throughout the year. We’ll catch up with some of the artists who performed on Milken Archive recordings to see how the experience influenced their careers and reflect on how music—and Jewish music—has changed since that time. Founder Lowell Milken will share some of his most poignant memories, as well as observations on how the Milken Archive has grown to exceed even his own expectations. And of course, we’ll continue to celebrate, illuminate, and disseminate music of the American Jewish experience on our website, in your inbox, and beyond.

2020 marks a number of other milestones, as well…

It’s the centenary year for three of our composers—Dave Brubeck, Harold Shapero, and Martin Kalmanoff—and for the Carnegie Hall premiere of Sergei Prokofiev’s Overture on Hebrew Themes, which was written for a group of travelling musicians trying to raise funds for a music academy in British Mandate Palestine.

On January 27, it will be 75 years since the liberation of Auschwitz. As people around the world acknowledge International Holocaust Remembrance Day with ceremonies public and private, we’ll look at how American composers have responded to the tragedy musically. While a great deal of research and concert programming of recent years has explored musical life inside the camps, most American Jewish composers did not experience the Holocaust or anti-Jewish laws directly; they nonetheless have been compelled to address the Holocaust through their art. 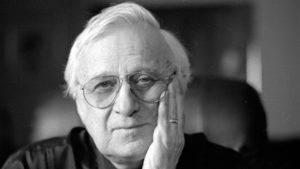 Fifty years ago, three very different sacred services premiered. Later this year, a web feature will explore Raymond Smolover’s rock service, Gates of Freedom; Lazar Weiner’s Zekher l’ma’ase, a more traditional service composed in commemoration of the 100th anniversary of New York’s Central Synagogue; and Shiru Ladonai composed for Moog synthesizers by the great Gershon Kingsley, whom we sadly lost at the end of 2019. Read an appreciation of his remarkable life here.

We thank you for the enthusiasm and passion with which you have buoyed our work to date, and look forward to where our collective journey will take us in the future.