About The Author: Hirsh Glick 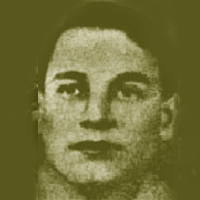 If there is one song that expresses the courage of the Jewish partisans during World War II, it is Hirsh Glik’s ‘Zog nit keynmol’ (Never say), also known as ‘The Partisans' Song’, which was adopted as the partisans’ official anthem.  Inspired by the story of the Warsaw ghetto uprising, the song remains a powerful tribute to the commitment of the Jewish people to fighting for their survival.  The author, barely in his twenties when he wrote the song, was born and raised in Vilna. Having inherited his musical talent from his mother, he spent most of his short life composing poems and songs of inspiration for his fellow Jews.

Glik was born in 1920 and attended a Hebrew elementary school in Vilna, before poverty forced him to take a job as an employee in an iron factory.  At the age of 13 he began composing his first poems, and three years later he founded, along with several other young Jewish poets, a literary circle called ‘Yungvald’ (Young Forest).  First writing in Hebrew, he soon moved to Yiddish, and established a reputation as one of the most promising poets of pre-war Vilna.  When the Soviets took over Lithuania in 1939, Glik’s leftist leanings allowed him to integrate fairly well into the Soviet world, and his songs and poems appeared frequently in the Jewish-Soviet press.  Although he published extensively, his family’s poverty required him to work, first in the paper business and then in a hardware store.

When the Germans invaded Lithuania in 1941, Glik was one of the thousands of Jewish and anti-Nazi Lithuanians who tried to flee the city to join the partisans in the forests.  Like many, he was caught and imprisoned.  Upon release, he volunteered to go and work at the Rzeza labour camp, cutting peat in a swampy area where he nearly died of typhoid fever. Through his long years of illness and imprisonment, Glik continued to compose poems and songs, writing them on scraps of paper or reciting them to other inmates so that they could memorise them.   A friend from Rzeza remembered how, while they were moving impossibly heavy pieces of turf, Glik would find a dry place to sit, ask his friend to hum a nice tune, and improvise words.

When the Jews from the camp were deported to the Vilna ghetto in 1943, Glik was already well known as a poet and member of the resistance.  With his comrades, he was involved in acts of sabotage and in preparing for a revolt.  He was also active in the ghetto’s literary scene, working with a circle of writers including Avraham Sutzkever and Leah Rudnitski. While there he wrote many songs, including 'Zog nit keynmol’, which he set to the melody of a Soviet song composed by Dmitri Pokrass.  The song spread quickly amongst the resistance fighters. Many of his other songs are also songs of resistance and optimism, including the popular ‘Shtil, di nakht iz oysgeshternt’ (Still, the night is full of stars). This song honoured the heroism of the female partisan Vitke Kempner, who blew up a German train and helped ghetto prisoners to escape.

Glik himself survived the liquidation of the ghetto, and was sent to a concentration camp in Estonia.  In July 1944, shortly before the camp was to be destroyed by the Nazis in the face of the rapidly approaching Red Army, Glik and 40 other prisoners managed to escape and flee to the surrounding forests.  There Glik joined up with a group of partisans, where he and all of his comrades were killed in combat with Nazi forces.

Arad, Y., 1980. Ghetto in Flames: The Struggle and Destruction of the Jews in Vilna in the Holocaust, Jerusalem: Yad Vashem: Martyrs' and Heroes' Remembrance Authority Ktav Pub. House.