Oyfn Pripetchik: About the Composer 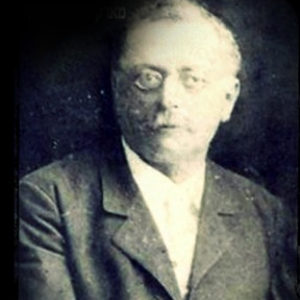 Born in Odessa into an Ashkenazi Jewish family, he moved with his family as a child to Zhitomir, where he later attended the four-year state rabbinical school. After that he studied law at Odessa University for one year, then completed his studies at Kiev University, and went on to practice law in Kiev. He practiced law throughout his life, barely managing to make a living. In 1903 he moved to Belgium to work as a legal adviser for a firm there; upon falling ill in 1905, he returned to Kiev, where he died two years later.

By the influence of Abraham Goldfaden, Warshawsky started to write songs and sing them in his circle of friends accompanied by a fortepiano. He did not take seriously his musical work and never recorded those songs, relying on his memory. Many of his works in this way were spread throughout the Jewish community of the Ukrainian region of the Russian Empire and most of them were simply adopted as folk songs.

Villain! Why do not you print such songs? If I would not know that those are your own songs, I would swear that I heard them sometime performed by my mother!

Later, by Aleichem's full cooperation, Warshavsky published his first collection, Yiddishe Volkslider (Jewish People's songs, Kiev, 1900) with a heartily foreword from the great classic. That book was republished not only in Russia, but abroad as well. The collection included such songs as Der Alef-Beis (commonly known as Oyfn Pripetchik), A Brif fun Amerike, Der Zeide mit der Babe. The songs described the everyday life of Jews in the Russian Empire.

Together Sholem Aleichem and Warshawsky started to tour around Russia performing their own repertoire. They also had plans to travel to the United States, however those plans were left unfulfilled as Warshawsky suddenly became ill and died on November 26. The second edition of the Warshawsky's songs was published in Odessa in 1914, with the following exclusively abroad: New York (1948) and Buenos-Aires (1958).

According to Prilutsky, Warshawsky spoke in the authentic dialect spoken in Volyn.