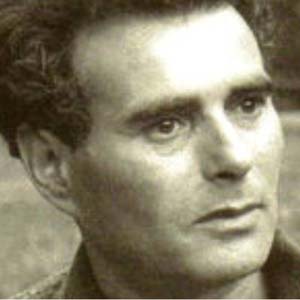 Yiddish poet, lyricist, and literary editor. Yoysef Kerler was born in Haysyn (Rus., Gaisin), southern Ukraine. He was named after his grandfather, who was a tailor and a badkhn (wedding jester and rhymester). In 1930, his family moved to Mayfeld, a Jewish kolkhoz(collective farm) in northern Crimea, where Kerler worked and continued his secondary education. In 1934, he attended a Yiddish machine-building technical school in Odessa, and also studied Yiddish literature and creative writing with Irme Druker (1906–1982). Kerler’s first poems appeared in the newspaper Odeser arbeter in 1935.

In 1937, Kerler attended the Yiddish Drama School of the Moscow State Yiddish Theater. He graduated in 1941 and was about to be sent with a group of young actors to establish a new Yiddish state theater in Riga, when Germany invaded the Soviet Union. He enlisted instead in the Red Army and was wounded in battle. Following a long recovery, he resumed writing and publishing articles and poems in Eynikayt, the newspaper of the Jewish Anti-Fascist Committee. Kerler’s war poems appeared in his first book, Far mayn erd ([Fighting] For My Land; 1944).

In 1947, Kerler moved to Birobidzhan, where he worked for Birobidzhaner shtern and openly protested the government’s policy to stop teaching Yiddish in schools of the Jewish Autonomous Region. After being cautioned by a local KGB agent, he returned to Moscow in 1948. The planned publication of his second volume of poetry was canceled later that year when all Jewish publications were terminated and prohibited in the Soviet Union. In April 1950, Kerler was arrested and sentenced to 10 years for “anti-Soviet nationalistic activity.” He served his sentence in the mines of Vorkuta and was released in late 1955.

In the Vorkuta gulag, Kerler attempted to learn Hebrew and wrote a number of poem cycles that he managed to hide. Being one of very few Yiddish poets who wrote while in prison, he was the only one to succeed in publishing many of those poems in Russian translation, camouflaged as “songs of the [Nazi] ghetto”; these appeared in his second poetry collection, Vinogradnik moege otca (My Father’s Vineyard; 1957).

During the initial post-Stalin years, when it was still impossible to publish literary works in Yiddish, Kerler was active as a lyricist, consultant, and author of short cabaret-style plays for a number of Yiddish singers, performers, and actors, including Mikhail (Moyshe) Apelboym, Zinovii Shulman, Misha Aleksandrovich, Emil Gorovets, Anna Iakovlevna Guzik, Esther Roitman, Nehama Lifshits, and Klementina Shermel. He wrote several popular songs, two of which are often mistaken for folk songs (“Der freylekher shnayderl” [The Jolly Tailor], folklorized as “Der tam-ganeydevdiker nign” [The Scrumptious Tune], which he wrote in Vorkuta, and “Am Yisroel khay” [The Nation of Israel Lives], which he wrote in 1969). His lyrics and poems were arranged and put to music by Zinovii Kompaneets, Modest (Manus) Tabachnikov, Vladimir Shainskii, and Lev Kogan. Some of Kerler’s gulag and later protest poems were put to music in the 1970s by Sholom Secunda, Sidor Belarsky, and Emil Gorovetz.

In the 1960s, Kerler collaborated with the popular Yiddish songwriter and playwright Boris Bergolts on a number of cabaret programs and plays. A second book of poems in Russian translation, Khochu byt’ dobrym (I Wish I Could Be Kind), was published in 1965, the year in which Kerler first applied for permission to immigrate to Israel. Initially the permission was granted; however, about a month later, it was revoked. Given Soviet realities of the time, this situation seemed hopeless. A number of prominent personalities tried to intervene on Kerler’s behalf (among them, Bertrand Russell, Georges Simenon, and Arthur Miller), and when the mass movement for immigration to Israel began later that decade, Kerler was among the first refuseniks. He wrote a number of letters, including collective ones cosigned by other refuseniks, as well as polemical articles in Russian, all of which were smuggled to the West and circulated in Russian samizdat.

Despite the fact that the Russian authors Andrei Siniavskii and Iulii Daniel’ had been sentenced to prison in 1966 for publishing works abroad, Kerler sent his new protests and earlier gulag poems to the New York Yiddish daily Forward and the Yiddish literary magazine Di goldene keyt in Tel Aviv. Initially, neither dared to publish his works, fearing for the author’s fate. However, after Kerler insisted that his writings be printed, the Forward began publishing them in 1969 and Di goldene keyt in 1970.

In March 1971, Kerler finally left the Soviet Union. On the eve of his arrival in Israel, he was awarded the Itzik Manger Prize for Yiddish literature. His first Israeli collection of Yiddish verse, Dos gezang tsvishn tseyn (Song through Clenched Teeth), appeared the same year under the auspices of the Hebrew University; a second book, Zet ir dokh (Despite All Odds), was published in 1972. The first contains nearly all his earlier gulag poetry as well as later poems of protest (some of which were issued in English translation by Elye Palevsky in a brochure produced by the Workmen’s Circle in 1972). The second book contains his war poems and much of his mature lyric poetry, written in the 1960s. His Israeli verse, both reverberating with his overwhelming new reality and echoing the indelible memory of his childhood and life in Russia, was published in three subsequent volumes: Di ershte zibn yor (The First Seven Years; 1979), Himlshaft (Heaven Above; 1986), and Abi gezunt(For the Sake of Health; 1993). In 1996, Kerler and his son Dov-Ber (who publishes poetry under the pen name Boris Karloff) published Shpigl ksav (Words in the Mirror), consisting of a selection of their poems published side by side.

Settling in Israel, Kerler reinvigorated the then still substantial group of Yiddish authors living in Jerusalem by organizing and establishing the Jerusalem branch of the Israeli Yiddish Writers and Journalists Association. He edited a number of books and in 1973 founded the annual collection of literature and culture Yerusholaymer Almanakh (Jerusalem Almanac), which he edited and published until his last days. His memoirs and critical essays on a selection of Soviet Yiddish writers are included in his books Der 12ter oygust 1952 (12 August 1952; 1977) and Geklibene proze (Prose Selections; 1991). His works have been translated into Russian, Chuvash, Hebrew, English, Spanish, Swedish, and French. Kerler’s last book is a Hebrew translation of his first Yiddish book published in Israel, Ha-Zemer ben ha-shinayim (Song through Clenched Teeth; 2000), translated by Ya‘akov Shofet. A posthumous collection of his poems, Davke itst—fun di letste un andere lider (Now Is the Time—New and Last Poems) appeared in 2005.