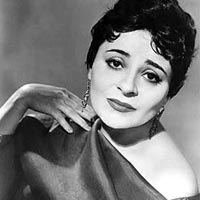 Victoria de los Ángeles (in Catalan, Victòria dels Àngels) (November 1, 1923 – January 15, 2005) was a Spanish operatic soprano and recitalist from Catalonia whose career began in the early 1940s and reached its height in the mid 1960s. Her voice could best be described as that of a flexible full lyric soprano with enough weight and volume to sing both lyric and dramatic roles. She also sang some roles more commonly associated with the mezzo-soprano repertoire. While she later made fewer appearances in opera, she continued to give recitals, focusing on mostly French and Spanish art songs, into the 1990s. She sang at the Barcelona Olympic Games in 1992.

Born Victoria López García into a humble Catalan family in Barcelona, she studied at the Barcelona Conservatory, graduating in just three years in 1941 at age 18. That year, she made her operatic debut as Mimì at the Liceu, but then resumed her musical studies.

In 1945, she returned to the Liceu to make her professional debut as the Countess in The Marriage of Figaro. After winning first prize in the Geneva International Competition in 1947, she sang Salud in Falla’s La vida breve with the BBC in London in 1948.

In 1949 she made her first appearance in the Paris Opéra as Marguerite. The following year, she debuted in Salzburg and Royal Opera House, Covent Garden as Mimi, and the United States with a recital at Carnegie Hall. In March 1951, she made her Metropolitan Opera debut in New York as Marguerite, singing with the company for ten years.

After making her debut at the Bayreuth Festival as Elisabeth in 1961, she devoted herself principally to a concert career. However, for the next twenty years, she continued to make occasional appearances in one of her favourite operatic roles, Carmen. She was among the first Spanish-born operatic singers to record the complete opera in 1958, a recording conducted by Sir Thomas Beecham using the recitatives added by Ernest Guiraud after Bizet’s death.

Though Carmen lay comfortably in her range, she nevertheless sang major soprano roles, best known of which were Donna Anna, Manon, Nedda, Desdemona, Cio-Cio-San, Mimi, Violetta and Mélisande. Like Montserrat Caballé, she was a true exponent of bel canto singing.

On January 15, 2005, Victoria de los Ángeles died of heart failure in Barcelona at age 81. She had been hospitalized for a bronchial infection since December 31. Those close to her said her voice was still beautiful to the end.

De los Ángeles married Enrique Magriñá in 1948 and had two sons, one of whom survived her.