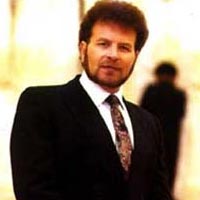 He is best known for his Broadway performance as Jean Valjean in the musical Les Misérables.
Cantorial career
The son of a Holocaust survivor, Fisher was born in Petah Tikva, Israel. He began studying at age 22, after the Yom Kippur War and his discharge from the army following 3 years of service. Fisher studied at the Tel Aviv Academy of Music, and studied privately under famous cantor Shlomo Ravitz. He then took up the cantorial position at the Great Synagogue in Tel Aviv, followed by 4 years in South Africa. For over 20 years, Fisher was the cantor at Kutsher’s Hotel in the Catskills during the Jewish high holidays. In 2005 Fisher became the Chief Cantor of New York Synagogue.

Les Miserables
After being mesmerised by the London performance of the 1980s hit musical, Fisher, despite no prior acting experience, requested the part in a Hebrew production of Les Misérables. He played its leading role, Jean Valjean, in Israel from 1987 to 1990, and made local fame.

He played the role on New York’s Broadway during the winter of 1993-4, and later at London’s West End, where he was invited to perform before Queen Elizabeth II. At both venues, Dudu was the first performer excused from Friday night and Saturday performances, as he is an Orthodox Jew and was not able to perform because of the Sabbath.

Other performance roles
Among Fisher’s other performances is his one-man Off-Broadway show, Never on Friday, an anecdotal work exploring the complications of his experience on Broadway as an observant Jew. He performed in many tours around Israel, the United States, and the world, particularly in Jewish communities, performing classics, as well as musicals, such as Over the Rainbow which toured Israel with Fisher performing 40 Broadway show tunes.

He performed for United States President Bill and Hillary Clinton, and for Britain’s Royal family, and the Thai Royal family.

Discography
In addition to his stage and synagogue performance, Dudu Fisher has released over 25 albums, including songs in Hebrew, Yiddish, and English, many classics and cantorial pieces, as well as music for children. He also sang the part of Moses in the Hebrew version of Steven Spielberg’s animated film, The Prince of Egypt.