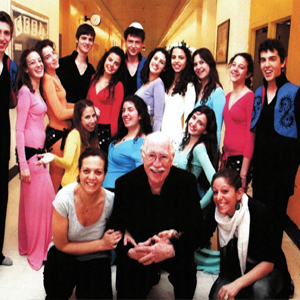 When Yoav and Mira Ashriel took the helm of the Israeli Dance Club at Hapoel Tel Aviv, in 1951, a performing group was organized and Danny and Mira became the soloists. In 1955, Danny was asked to join Halehaka Hamerkazit of the Histradrut; the members were the top dances in Israel and it was directed by Yonatan Karmon. In 1956, Danny took over the leadership of the club. His six-hour work responsibilities included one hour instructing children followed by one hour each for beginner, intermediate, and advanced level adults, and the final two hours were devoted to the performing group. While Yonatan set the choreography, the rehearsals were conducted by Danny.

While he was teaching folk dance sessions at Hapoel Tel Aviv, Danny began to introduce some of Karmon’s dance choreography from the performance medleys such as Haroa Haktana, Al Tira, and Yamin U’Smol. These dances have come to be Israeli folk dance classics. As a part of the Karmon Israel Dance Company which first appeared on The Ed Sullivan Show, November 2, 1958, Danny came to the United States, where he later introduced these dances as well as nine more from the Karmon repertoire.

Subsequent to meeing Fred Berk in 1962, Danny began to give workshops at the 92nd Street “Y” and from their discussions came the idea to produce folk dance recordings. Ami Gilad, the music director and accordionist, and Nechemia Sharabi, the drummer, had been on tour with Danny. Three additional musicians and the vocalist Geula Zohar were also part of the musical ensemble for these recordings that were produced under the Tikva label.

The first album, “Dance Along with the Sabras,” was recorded in Buttenweiser Hall at the 92nd Street “Y” and included Haroa Haktana, Al Tira, and Debka Habir (Debka Uria), as well as the dance Hanokdim that Danny had choreographed in Israel in 1957. Hanokdim had already become popular in the United States prior to his arrival. This recording was so successful that it was followed by six more.

When Fred asked Danny to create an accessible dance for newcomers, Ami wrote the melody, Nechemia wrote the lyrics, Geula Zohar was the vocalist, and Danny did the choreography for At Va’Ani (1962), a dance that has become a classic around the world.

The Hora Israeli folk dance camp was held in 1979 and 1980 and merged with Summer Dalia in 1981 to become Hora Shalom at Cejwin Camps, which was co-founded and directed by Moshe Eskayo and Danny (1981-1989). Danny was an editor of Nirkoda(1999-2000), curently, the bilingual publication, Rokdim-Nirkoda.

In addition to conducting weekly Israeli folk dance sessions in the New York area, Danny has conducted master classes and workshops throughout North and South America, Europe, Australia, and Israel.

With the 60th anniversary celebration of the Dance Festival and of Israeli folk dance at the “Y,” Danny also marked his 60 years of dancing, teaching, energizing, and inspiring folk dancers everywhere.

Albums by The Sabras

Dance Along With Sabras