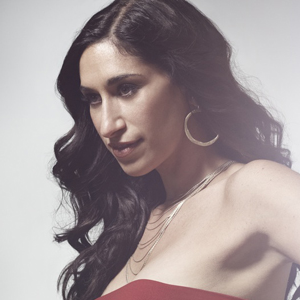 Sarah Aroeste is a Manhattan-based Judaeo-Spanish musician. Her music is often referred to as “feminist Judeo-Spanish rock.”

Aroeste grew up in Princeton, New Jersey. Her family roots can be traced to the formerly vibrant Greek Jewish community of Thessaloniki, which was almost completely destroyed in the Holocaust. In 1927, her family built a synagogue in Thessaloniki, which today remains one of the only synagogues there. Her family immigrated to the United States from Macedonia and Greece in the early 20th century.

In the late-90s, Aroeste was working for the Foundation for Jewish Culture in New York, where she created The New Jewish Musics Initiative. She was disappointed that, while there was a revival of Ashkenazi klezmer music, there was no similar revival for Sephardic music. Unable to find any modern Judeo-Spanish music, she started her own Judaeo-Spanish rock band in 2001. At the time, there were very few people playing Judeo-Spanish music. Born Sarah Silverman, she adopted her mother’s maiden name when she began performing as a Judeo-Spanish musician. Her goal was to obtain a wider, younger audience for Judeo-Spanish music, by rearranging the traditional music of her ancestors to give it a hip, modern spin. Aroeste has been at the forefront of the contemporary Judeo-Spanish music revival.

Developed by Spanish Jews following their expulsion from Spain, the Judeo-Spanish language dates back to the 15th century. Because it is rooted in the dispersal of its people, Judeo-Spanish music is not from one particular region, but rather from a variety of geographies and ethnicities. Its origins lie in Castilian Spanish, with shades of Hebrew, Aramaic, Arabic, Turkish, Greek and other languages. As of 2012, Judaeo-Spanish is spoken by fewer than 100,000 people, the majority of whom reside in Israel.

A la Una and Puertas
Aroeste’s first two albums, 2003’s A la Una: In the Beginning and 2007’s Puertas, were primarily Judeo-Spanish updates of traditional Sephardic standards. Produced by Frank London, Puertas features standard rock instruments like guitar, bass and drums, along with Middle Eastern ones like the oud and dumbek. It was described as “traditional Judeo-Spanish music updated with rock, funk and jazz.”

Gracia
Aroeste’s third album, Gracia, is named after Gracia Mendes Nasi, a 15th-century Jewish woman who helped Jews who had converted to Catholicism in order to flee the Spanish Inquisition. Produced and arranged by Shai Bachar, it features the rapping of poet Vanessa Hidary, and its opening track samples from a 1971 speech by Gloria Steinem.[8] Unlike her first two albums, many of the Judeo-Spanish songs on Gracia are originals written by Aroeste.[15] She has stated that it is her most experimental album to date.[16] With this release, she “developed a style that borrows liberally from all sorts of unexpected places, from Santigold fusion-pop to gothic metal,” while taking care to insure that “during these genre experiments the Judeo-Spanish influences don’t disappear, but are integrated.” Gracia has been labeled “the strongest case around for the ongoing relevance of Sephardic music.”

In 2012, music from Gracia was featured on Alt.Latino on NPR, Transpacific Sound Paradise on WFMU and WBEZ Chicago Public Radio.

Ora de Despertar
Aroeste’s fourth album is an all-original Judeo-Spanish children’s album, the only known contemporary recording of its kind.[18] The songs teach simple concepts in Judeo-Spanish and range in themes from learning about mealtimes to body parts to animals on a farm. With this recording, Aroeste has been credited for helping to perpetuate ephardic culture for a new generation.

Ora de Despertar (Time to Wake Up)
In July 2017 Aroeste released a bilingual illustrated children’s book in Judeo-Spanish and English. The book teaches about morning rituals and what to be grateful for upon waking up. It is considered to be the first of its kind.