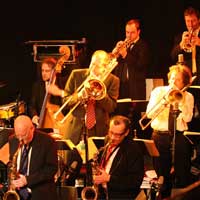 The Orchestra began in 1987 with 12 members but now performs with between 40 and 50 musicians. At the time the Orchestra first toured Europe, there emerged a renewed interest in waltz music. The revival began in the Netherlands and was ignited by their recording of the Second Waltz from Shostakovich’s Jazz Suites. As a result, Rieu became known as the waltz King.

Rieu and his orchestra have performed throughout Europe, in North America, and Japan. Winning a number of awards including two World Music Awards, their recordings have gone gold and platinum in many countries, including 8-times Platinum in the Netherlands. In September 2007 Rieu performed in Australia for the first time solo, without his Orchestra at the Eastland shopping centre in the Melbourne suburb of Ringwood playing “My Way” and “Waltzing Matilda” – and the next day appeared at Sydney’s Arena Cove, Warringah Mall shopping complex with the same set. Rieu and orchestra returned to Australia in November as part of his world tour. Rieu and his orchestra played 3 concerts at Melbourne’s Telstra Dome from 13-15 November and continued their tour throughout Perth, Sydney, Brisbane and Adelaide, through to December 2008. The concert theme is ‘A Romantic Vienna Night’ and the set comprises a complete replica of a Viennese castle, complete with 2 ice-skating rinks 2 Fountains, and a ballroom dance floor situated above and behind the Orchestra. Rieu’s largest concert attendance to date in Australia was 38,000 on Saturday 15th November in Melbourne. The Perth concert did not feature the replica of the Viennese Palace as it was stated in the press because it would not fit into the front doors of Subiaco Oval.

He records both DVD and CD repertoire at his own recording studios in Maastricht in a wide range of classical music as well as popular and folk music plus music from well-known sound tracks and theatre musicals. His lively orchestral presentations, in tandem with incessant marketing, have attracted worldwide audiences to this subgenre of classical music.

Albums by The Johann Strauss Orchestra