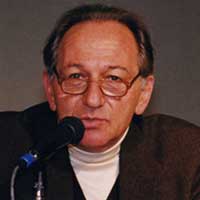 Eliahu Toker was born in Buenos Aires, Argentina, in 1934. Jewish argentine poet and translator. He has written eight books of poetry, such as “Lejaim”, 1974, and “Padretierra” (Fatherearth), 1977.

Poetry translator from Yiddish into Spanish, he has published many books with his translations, such as “El resplandor de la palabra judía”, (The Blaze of the Jewish Word), 1981, great anthology of seventy Yiddish poets and more than 300 poems. Translator of Hebrew classical texts, such as “El Cantar de los Cantares” (The Song of Songs), 1984, or the talmudic “Pirké Avot”, 1988. Editor of anthologies of Argentine Jewish writers, among these “Buenos Aires esquina Sábado, vida y obra de César Tiempo” (Buenos Aires Saturday corner, life and work of César Tiempo), 1997. His books were awarded the Faja de Honor (The Band of Honour) in 1997 by the Argentine Writers Society; in 1982 and 1989 the Mexican Jewish community conferred upon him the Fernando Jeno Award.

Architect, he worked in his profession twenty years and afterwards his only dedication has be to literature, making also historic and cultural exhibitions, like in the Argentine National Librery “Destrucción y Reconstrucción” with Ana Weinstein, about the bombing of the Buenos Aires Jewish Community building in july 1994.