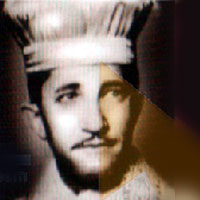 Samuel Vigoda is generally considered to be one of the last of the star Chazanim of the “Golden Age.”

He was born in Dobrzin, near Warsaw where his father was the Chazan/Shochet but, as Vigoda said himself, ‘…he wore two hats, and with the two hats he didn’t make a living.’ The young Samuel was very unimpressed with the hard life that his father led and never intended to become a Chazan himself.

To try to improve his lot, Vigoda senior took his family to Hungary. One day, Yossele Rosenblatt came to their town to officiate at a wedding. At the reception Vigoda senior sang, assisted by Samuel and his brother and, being very impressed, Rosenblatt asked that the boys be allowed to come to Pressburg to sing with him regularly.

Being assured that Rosenblatt would take good care of them, Samuel and his brother went to live in Rosenblatt’s home, where they remained for two and a half years.

When Rosenblatt left for Hamburg, Samuel returned home and began to study medicine, but his studies were interrupted by the First World War when he was conscripted into the Hungarian Army. At the end of the war, he was discharged with the rank of first lieutenant.

Since the University of Cluj, where he had begun his medical studies, was now part of Rumania, and as the University of Budapest, because of their quota system, wouldn’t accept him, Vigoda, (somewhat fortunately for the world of Chazanut) found himself unable to return to medicine, and turned to Chazanut as a way of making a living.

Vigoda held some very fine positions in Budapest and was soon making a very good name for himself. When word got out about him, people flocked to hear the new, young wonder-Chazan.

The opportunity came for Vigoda to travel and he decided to go to Zurich. Overhearing, after an audition, that his potential appointment was in jeopardy if he wasn’t married, Vigoda got his sister to write him letters, so that he could say that they came from his wife!

After Zurich, Vigoda went to Germany and then Amsterdam, where he did very well, officiating in various synagogues. A wealthy diamond-dealer who befriended him, arranged for him to obtain a visa to America, on the strength of his singing of an aria from ‘La Juive.’

Before going to the States, he went to Paris where he also officiated in many congregations, and was offered a position in the largest Orthodox one on the Rue Pave, which he didn’t accept.

On arriving in the States, Vigoda contacted Rosenblatt, who arranged for him to officiate that very Shabbat in Rosenblatt’s own Shul, Congregation Oheb Zedek, in New York. Indeed, this was a position that he was to be appointed to, when Rosenblatt left.

Samuel Vigoda lived well into his nineties, and was feted by Chazanim until the very end of his life. He travelled extensively, giving concerts in practically every large city in the United States and Canada. He was a composer, as well as a performer, and left behind some treasured recordings of his remarkable singing.