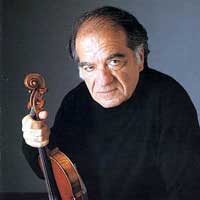 The 2002/2003 season marked the 75th anniversary of Ruggiero Ricci’s extraordinary career as a concert performer. His debut in 1928 at the age of ten in San Francisco playing a formidable program of works by Vieuxtemps, Saint-Saens, Mendelssohn and Wieniawski, astounded the audience and started him on the road to early stardom. His consecration as a world class “wunderkind,” one of this century’s few authentic prodigies came the next year in New York when the leading critic of the day wrote: “All that great violinists do, he did.”

He made his first tour of Europe in 1932 at the age of fourteen, a highly sensationalized series of concerts with the world’s greatest orchestras; he continue to play extensively until, ironically, the Army Air Force put a stop eleven years later to his world travels. He enlisted at the beginning of the war and became “Entertainment Specialist Ricci.” During those three years he played and broadcast hundreds of concerts under a variety of unusual conditions, often without an accompanist, exploring and presenting the largely unexploited solo violin repertoire. He remained an enthusiastic exponent of the solo recital, basing a majority of his programs on the solo works of Bach, Paganini, Wieniawski, Kreisler, Ernst, and Bartok. His was the first recording of the unadulterated Paganini Caprices, and he performed the U.S. premieres of both the Fourth and Sixth Concerti. Not surprisingly, Ricci is recognized as having greatly contributed to the world’s renewed appreciation and affection for the great Nineteenth Century composers, though he maintained a broad repertoire of over 50 concerti. He has performed the world premieres of several distinguished contemporary composers including Alberto Ginastera, Gottfied von Einem, Alexander Goehr, Joseph White, Gerard Shurmann and Carlos Veerhoff. His discography encompasses the widest repertoire of any violinist. His fourth recording of the Paganini Caprices was made for the first time on Paganini’s own Guarneri, exceptionally lent to Ricci by the City of Genoa. He performed over 5,000 concerts in 65 countries.

Ricci’s first teacher, from the age of six, was Louis Persinger. He later studied with Michel Piastro, Paul Stassevitch and Georg Kulenkampf. He taught at Indiana University, the Juilliard School, University of Michigan and the Mozarteum in Salzburg, Austria. His book, “Left Hand Violin Technique” is published by G. Schirmer with a further volume to be published later this year.

Ricci’s last performance in the United States was October 12, 2003 at the Smithsonian Institution in Washington, D.C. At his farewell appearance in the south of France that summer, he played with idol Martha Argerich at Ivry Gitlis’ Festival.

He currently lives in Palm Springs, CA and gives Master Classes in the greater Los Angeles area under the auspices of the Jascha Heifetz Society and will be teaching in Europe this summer.