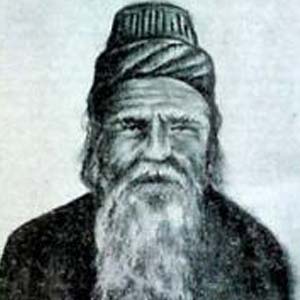 Rabbi Shalom ben Yosef Shabazi of the family of Mashtā (1619 – ca. 1720), also Abba Sholem Shabbezi or Salim al-Shabazi, was one of the greatest Jewish poets of all time who lived in 17th century Yemen. He is now considered the ‘Poet of Yemen’.

Shabazi was born in 1619 in the town of al-Ṣaʻīd. His family’s pedigree has been traced back to Zeraḥ, the son of Judah, the son of Jacob who is called Israel. At the death of his father, Yosef Mashta, Shalom moved to the small town of Shabbez, near the city of Ta’izz.

Not long thereafter, he again moved and settled in Ta’izz where he built a house of prayer and a ritual bath (mikveh) outside of the city, beneath Jebel Ṣabir. It was from here that he and his family were expelled, along with most of the Yemenite Jews in 1679. He died in ca. 1720. His father, Yosef ben Abijad ben Khalfun, was also a Rabbi and a poet. Shabazi’s extant poetic diwan, comprising some 550 poems, was published for the first time by the Ben-Zvi Institute in 1977. He wrote in Hebrew, Aramaic, and Judeo-Arabic. Shabazi’s other works include a treatise on astrology and a kabbalistic commentary on the Torah. Shabazi’s grave in Ta’izz is revered by Jews and Muslims alike. He is now considered by Academics as the ‘Shakespeare of Yemen’.

He wrote a commentary on the Torah called Hemdath Yamim (Pleasant Days). His leadership was instrumental in helping the Jews of Yemen survive some of the worst persecution in its history. Mori (Yemenites often call their spiritual leaders “Mori” meaning “my master” or “my teacher”). Shabazi wrote a kinah (lamentation) for recitation during the Ninth of Av, recalling the terrible exile of Jews in his lifetime (known as the Exile of Mawza) from all cities and towns in Yemen to an inhospitable desert called Mawza, duringtime the Jews were banished there of which 20% perished.

The Diwan of Mori Shabazi alludes not only to that dreadful event in 1679 but also to the Decree of the Headgear in 1667. Shabazi’s Diwan has become an essential part of Yemenite Jewry’s spiritual and cultural lives.

According to Professor emeritus, Yosef Tobi, “the fundamental revolutionary change in the poetry of Yemen occurred with the work of Yosef ben Yisrael (17th century), when poetry became the primary tool for spiritual expression of Yemenite Jewry, and when the subject of exile and redemption took on vitality and had the most concrete political significance. Even more so, we find this change in the poetry of his younger relative, Shalom Shabazī.”

In Shabazi’s Diwan there can be found many long eschatological poems, numbered at several dozen, and which open with the words, Baraq burayq, or with compounds that are similar to them, said to be a sign of some supernatural occurrence, as one of the signs heralding the coming of the Messiah. The founder of these genres of poetic visions of redemption is Yosef ben Yisrael in whose footsteps followed many poets, including Shabazī who is said to have refined it. An example of Shabazi’s sublime poetic style is seen in the following lyric although the rhyme has been lost in the translation:

May God watch from His sacred abode and smite / all the enemies of His people in the blink of an eye. Herewith God rises and stands on a plumbline [to judge the oppressors] / He shall let them drink a cup of venom, but not wine. Destroying angels shall hasten towards them, to smite / them with Heavenly arrows and with weapons of war. Turn back, O Zion, and see the consolation of your son / when Cain is given to annihilation. My Saviour, summon a day when I shall unsheathe my sword and smite / them, all that are comely and pleasant to look upon.

Mori Shalom Shabazi is said to have written nearly 15,000 liturgical poems on nearly all topics in Judaism, of which only about 850 have survived the ravages of persecution, time and the lack of printing presses in Yemen. He wrote his Diwan (Anthology of liturgical poetry) in Judeo-Arabic, Hebrew and Aramaic. When rumors reached Yemen concerning Shabbetai Zevi in 1666, many of the Jews of Yemen were drawn after him, including Shabazī himself, even though the rabbinic court at Ṣanʻā’ had completely rejected the faith in this pseudo-Messiah. In Shabazi’s poem, Adon ha-kol meḥayye kol neshama, he alludes to Shabbetai Zevi in these words: “We have heard singing from the end of the earth: / A righteous gazelle has appeared in the East and West.” The “righteous gazelle” (in original Hebrew: zevi ṣaddīq) is an allusion to Shabbetai Zevi. Mori Shalom Shabazi is also said to have composed several poems concerning the Exile of Mawza (Galut Mawza), which he witnessed in his day.

Currently, the Israeli government and the Chief Rabbinate are trying to bring the remains of Rabbi Shabazi to Israel. Many of his poems have elaborate detailed premonitions of returning to Israel, with his people.

Shabazi’s poem “Im Nin’alu” (אם ננעלו) became a hit single sung by Israeli singer Ofra Haza whose family is of Yemenite origin, and it has also been interpreted by Yemenite singer Daklon. Other songs, such as “As’alk” (أسألك), were also performed by Ofra Haza as well as Zion Golan, Aharon Amram and Shoshana Damari.

Another famous poem, “Ahavat Ra’aya Retzoni”, was performed by Zohar Argov. The Israeli metal band, Orphaned Land, sang one of his poems in ita song “Olat Ha’tamid”. There is also a small street named after him in the Nachlaot neighborhood of Jerusalem.