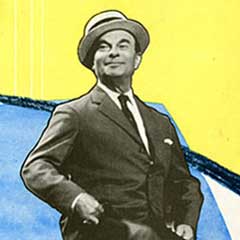 Pesach Burstein (1896 – 1986) was an Israeli-American comedian, singer and director of Yiddish vaudeville and Yiddish theater. His wife Lillian Lux, and son Mike Burstyn were also actors on the Yiddish stage.

Often criticized for performing melodrama, song-and-dance and vaudeville acts, and not performing serious theater, he is best remembered for singing Odessa Mama and the Yiddish version of Sonny Boy, being an impressive stage whistler, and being the actor – director of the popular A Khasene in Shtetl (A Wedding in the Village) act with his entire family.

Life and career
Pesach-ke Burstein ran away from home in Poland to join a traveling Yiddish theater troupe, and wandered from country to country. He was arrested as a spy by Russians during World War I. He came to the USA in the 1923, when his troupe was sponsored by Boris Thomashefsky to play on the Upper East Side Yiddish theatres on Manhattan’s Second Avenue. Securing a contract with Columbia Records, he went on to record a number of hits, including the Yiddish version of Sonny Boy, and Odessa Mama. He married twice, the second time to Lillian Lux, an upcoming star of the Yiddish stage. He performed The Komediant and A Khasene in Shtetl and other popular Yiddish productions in numerous productions all over the world, first with his wife and his troupe, and later along with his twin children Mike and Susan as well (advertised as the Four Bursteins, the twins were given stage names of Motele and Zisele).

After the Holocaust, due to a drastic reduction in the size of the Yiddish audience, he was instrumental in finding out diasporic communities as far afield as South America, and East Europe, as well as Israel. He initially settled in Israel but later left due to the state tax levied on Yiddish theater for promotion of the Hebrew language, and problems with authorities.

His family and troupe also performed extensively in upstate New York in the Borscht Belt (the Catskill Mountains area), and he later opened his own theater in Brooklyn – The Hopkinson. His troupe usually performed crowd-pulling acts, but won critical acclaim in Israel and on Broadway for performing Itzik Manger’s Songs of the Megillah (Yiddish: Megille Lider – the longest running Yiddish production to date in Israel, released on Broadway as Megilla of Itzik Manger). He also performed a small role in the Israel Becker-directed movie Shnei Kuni Leml, starring his son. On the 100th anniversary of his birth, director Arnon Goldfinger directed a documentary film about the lives and careers of the Burstein family – The Komediant, named after Burstein’s career and being the name of one of his shows.

His autobiography – What a Life! – was co-authored with his wife in Yiddish (Geshpilt a Lebn, 1980) and later translated into English.

Pesach means Passover in Yiddish, and Pesach-ke Burstein was so named because he was born on the day of Passover in 1896; he died a few hours before Passover 90 years later in 1986. He is buried in the Yiddish Theater section of the Mount Hebron Cemetery.