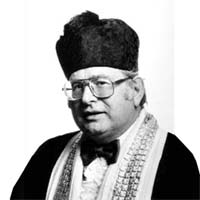 Education: University of Buffalo and Jewish Theological Seminary in NYC

Cantor Leon Lissek is well-known for his melodic tenor voice and his wide repertoire of music. Appearing at concerts, music events and community gatherings in major cities throughout the USA and Canada he gained national prominence. He served as Cantor at Congregation B’nai Amoona in St. Louis, Missouri, for 30 years and is now Cantor Emeritus. He has also achieved fame for his original music compositions.

During WWII, Leon Lissek’s mother placed him in a Catholic orphanage where he was cared for by the nuns until the end of the war. It was not until 1993 that he learned the sad truth that his father had perished in Auschwitz. After the war Lissek’s mother remarried and came to Buffalo, NY. The war broke up his education as well as his family. After moving to the USA in 1950, he was able to resume his studies, eventually entering the University of Buffalo.

Young Lissek’s talent showed early, and his gift of an unusual dramatic tenor voice was matched by his love of singing. He participated in operas during college as he pursued an operatic career and the goal of singing at the Met. But his deep feeling for Jewish tradition and music along with the guidance of mentors inspired him to become a cantor. He entered the Cantor’s Institute at the Jewish Theological Seminary in NYC, where he studied with Cantor Moshe Taube and Cantor Max Wohlberg. Upon graduation he accepted a position with a Philadelphia congregation before moving to St. Louis in 1969.

Cantor Leon Lissek has actively promoted Jewish music and culture during his long and illustrious career. He feels that it is important “to let people know about the fantastic musical tradition which is full of jewels if only we look for them.”

All Things You Are and Other Favorite Love Songs

A Toast to Life

A Festival of Jewish Music