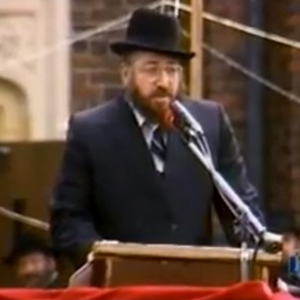 Chazan Teleshevsky was born in Russia. His father, a Rabbi and Chassidic Cantor, reared Moshe in the tradition of joy through music. At a very early age it became apparent that he had unusual musical talent; at nine he was already accompanying his father on the piano and at eleven he entered the concert field singing before standing room only audiences.

A Rabbi and Torah scholar as well, Chazan Teleshevsky’s natural talent was enriched by an outstanding musical education.

Chazan Teleshevsky’s rendition of Sheyiboneh, which ended with the crowd joining in with him, was a well-known part of every farbrengen of the Rebbe, and many other Chabad events.

He was also known for the Menorah lighting in 770, which he led while singing the blessings and the haneiros halalu prayer.

Chazan Moshe Teleshevsky, known as “the Rebbe’s Chazan” whose beautiful voice and signature “Sheyiboneh” ended every farbrengen, passed away on the second day of Sukkos, 5773.