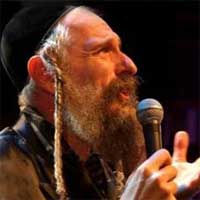 Mordechai Werdyger, Born April 16, 1951, professionally known as Mordechai Ben David (lit. Mordechai son of David) or MBD for short, is a superstar in the Orthodox Jewish community often referred to as “The King of Jewish Music”.
Werdyger has produced a record number of Jewish albums, many of them incredible hits. He also starred as the main performer in the popular Hasc concert for almost two decades. His father, David Werdyger, was a popular Jewish singer and cantor originally from Cracow and is a “Schindler” Jew. Werdyger blends traditional Hasidic melodies with modern pop to create the songs in his albums. Werdyger stopped singing at mixed concerts for religious reasons[citation needed].

Werdyger lives in Sea Gate, Brooklyn.
Lichtiger Shabbos” on Just One Shabbos (1982) [retitled “Yiddish” on Solid MBD (1993)] is an adaptation of “Close Every Door To Me”, from the musical theater production Joseph and the Amazing Technicolor Dreamcoat, by Tim Rice and Andrew Lloyd Weber.

“Yidden” on Jerusalem: Not For Sale (1986) uses the music of “Dschinghis Khan” (English: Genghis Khan), from the German band Dschinghis Khan.

“Father Dear” on Yerushalayim Our Home (1988) [retitled “Daddy Dear” on The English Collection (1998)] uses music from “Little Child,” performed by many earlier singers, notably Cab Calloway and his daughter in 1956; it, in turn, is adapted from an earlier French song.