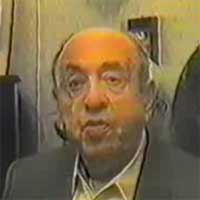 Mikhail Alexandrovitch, a widely admired tenor who was one of Russia’s most popular recording artists during the Soviet era, died 4 July in Munich at age 87.

Alexandrovitch trained in the bel canto style with tenor Beniamino Gigli, and Russian pianists such as Sviatoslav Richter, Vladimir Ashkenazy and Mstislav Rostropovich eagerly accompanied him in recital, The Times says. Over the years, he made more than 6,000 concert appearances and sold more than 20 million records.

But Alexandrovitch’s international career never really took off, in part because as a devout Jew, he insisted on taking cantorial engagements at synagogues in addition to his operatic and concert performances. His religious beliefs also put him at odds with the atheist Soviet regime. According to The Times, “invitations to Milan, Paris, London and New York were increasingly left unanswered and he became what one American critic called ‘Russia’s best kept cultural secret.’ ”

Born in Riga, Latvia, Alexandrovitch began his professional career as a cantor in Manchester, England. But British synagogues did not allow their functionaries to have secular careers. So he returned to the Baltic states, this time Lithuania, where he became a respected cantor and also developed a reputation on stage singing Verdi, Puccini, Rossini and Gounod as well as Russian roles by Glinka and Tchaikovsky.

He fled to Russia when the Nazis invaded the Baltics in 1941, and there he reached the height of his popularity as a recording star after 1945. But the authorities turned against him because of his religious activities, particularly after he applied to emigrate to Israel in 1960. Israeli Prime Minister Golda Meir helped win him an exit permit in 1972, but by then he was 58 and considered too old to start a career on the major opera stages of the West.

When the Soviet Union collapsed he was almost 80, but he went back to give 40 concerts, all of which sold out, The Times says. Two years ago the Chaliapin Museum in Moscow devoted an exhibition to him. Earlier this summer, Alexandrovitch finished his final recording, a disc of Yiddish songs.

A Khazendl Oyf shabbos and other Yiddish folk Songs