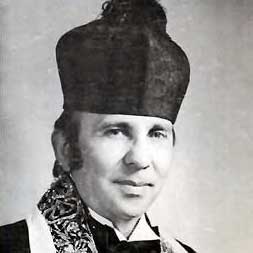 Cantor Louis Danto’s voice has amazed audiences around the world. A child prodigy and a Holocaust survivor, he has been exciting audiences since he was a soloist in Sulwalki, Poland at the age of 6. After a performance at Carnegie Hall, Alan Rich of the New York Times wrote, “a voice of great beauty, clear and true — breathtaking, radiant, as though from another world.”

Louis Danto studied voice and cello in the conservatory of Minsk and later of Lodz. While still a child he won first prize in the all-Russia voice competition. Danto combined the best of his artistic background with his Jewish soul and made Hazzanut his chosen career. In Italy he studied voice with L. Samoshi.

In New York he studied voice with Dr. Puegell. He studied Hazzanut with Leo Low and Herman Zalis. He also expanded his knowledge of Jewish sources at the Yeshiva of Mirr where he studied from 1950 to 1954. Danto soon became internationally recognized for the rare beauty and purity of his voice. He was praised for the mastery, power and control of his voice, and for his extraordinary emotional expressivity.

By the time Louis Danto arrived in the United States in 1950 his voice had already thrilled audiences in Russia and Italy. In the following years his repertoire expanded to include Italian, French and Russian Opera, and Yiddish art and folk songs.

In September 1984 he sang at Toronto’s Maple Leaf Gardens before millions of television viewers and a live audience of 16,000 which included Prince Phillip and Queen Elizabeth who personally congratulated and thanked him.

He served at the Jewish Center of Atlantic Beach, New York, and at the Park Synagogue in Cleveland, Ohio, retiring in 1998 after over 30 years as cantor at Beth Emeth Bais Yehuda in Toronto.

In February 1998, Cantor Louis Danto received an Honorary Doctorate in Music from the Jewish Theological Seminary in New York City.