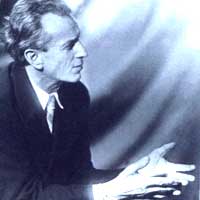 Leibu Levin was born in the town of Kimpelung, Bukovina, in 1914. From 1919 he lived in Czernowitz. He studied Yiddish language and literature in the Seminar of the “Yiddisher Shul-Farayn” and at the same time started to appear with recitals of Yiddish prose and poetry, often singing his own melodies. Levin’s first recitals were warmly acclaimed by the linguist and philologist Dr. H. Gininger. In a long article, published in the Bucharest literary magazine “Di Vokh” on January 31,1935, he wrote: “Leibu Levin showed himself to be an excellent interpreter of Yiddish poetry… Levin is perhaps the first interpreter of Manger. Never before have we been so intoxicated by the specific Manger landscape and its fragrance as when Levin recited Mangers ballades…” In 1939 in Czernowitz, Hersh Segal published the little album “Zeks shloflider” (“Six Lullabies”), with Levin’s melodies to poems by I. Manger, H. Leivick, M.-L. Halpern, A. Reisen and N. Yud, and with Isiu Scharf’s illustrations. One of those songs, M.-L. Halpern’s “Az du vest batsoln, bruder…” crossed the ocean to become a folksong even during the composer’s lifetime.

Leibu Levin gave innumerable recitals in Czernowitz, Bucharest and all the larger and smaller towns in Romania. In Beldz (Bessarabia) he met the folksinger Zelik Barditshever and was the first one to perform his songs on stage. The scores in the book “Zelik Barditshever. Lider Mit Nigunim”, published by H. Segal in Czernowitz, 1939, were written down following Leibu Levin’s interpretation.

When in 1941, the war started between Germany and USSR, Levin was called up and later sent to a labor camp in the Ural. In 1942 he was arrested and sentenced without trial to 15 years imprisonment. Not until 1956 was he discharged and “rehabilitated”. He performed for six more years, but then had to leave the stage, for his health had been severely undermined in the prison camps. However, he continued to set Yiddish poetry to music. In 1972 he came to Israel. Here he set to music, among others, six poems in Hebrew. He also translated from German into Yiddish the poems of the Czernowitz poet Selma Meerbaum-Eisinger, who died in a Nazi-camp at the age of 18, and set six of her poems to music. A few recordings of him singing his songs have been made in the 70s by Kol Israel (No. 1,6,10,18,19,20), as well as of his last concert in 1982 (No. 2,3,4,5,11,14-17). This CD contains most of those recordings, and also a few made by the National Sound Archives in Jerusalem (No. 12,13), as well as home recordings (No. 7,8,9). Leibu Levin died in 1983, in Herzlia, Israel. He left about 80 melodies to the finest lyrics of Yiddish poetry. The songs to texts by Hebrew poets, with Hanan Winternitz’s piano arrangements, were published in 1990 in the Nisimov Music Library in Tel Aviv. An anthology of 49 songs to Yiddish poetry, with piano arrangements by H. Winternitz, has been published in 2006 in “I. L. Peretz Publications”, Tel-Aviv. It contains 49 songs, as well as photos and drawings. All the texts are in Yiddish, English and Hebrew.