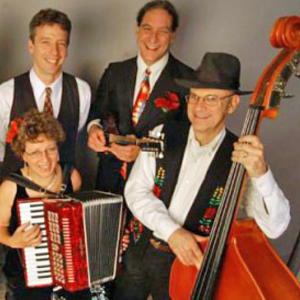 Jim is known throughout New England as an instrumentalist, songwriter and teacher. In addition to performing with Klezamir, Jim is one of the Lonesome Brothers, an exciting alt-country collaboration with bassist and songwriter Ray Mason. In 1996 the Lonesome Brothers completed a CD of traditional Yiddish songs with Canadian singer Wolf Krakowski. In 2007 he released a CD “The Great Pumpkin Roll” of original songs about libraries to support the Westhampton Library project.

Amy Rose founded Klezamir in 1986 after a summer of playing klez with Klezmer V’Od in Colorado because she discovered there was no turning back – klez was the hottest thing she’d ever heard and it was love at first boom-chick! With ancestors from Russia and Poland, among them a concert pianist and Yiddish theater director, Amy found an instant heartfelt connection with klezmer music. Amy is the band’s manager and it is her friendly voice you will hear when you call to inquire about booking the band. She divides her time between performing, managing the band and teaching piano and flute. Since graduating from the University of Michigan, Amy has also recorded “The Rosewood Duo”, an album of flute and guitar duets; and “Silver Mountains” a solo piano album of originals and compositions by Claude Debussy.

On acoustic and electric bass and nose flute:  Joe Blumenthal

Bassist Joe Blumenthal has been with Klezamir from the beginning. His “straight job” is owning Downtown Sounds, a musical instrument store in Northampton, MA. He also plays with two Balkan music dance bands: XOPO and Druzina, a jazz quartet called Cafe Americano and leads an amateur mandolin and guitar ensemble called Mando Mucho. He has studied bass and drum at many sessions of Klezcamp and EEFC Balkan Camp. Joe also occasionally plays a peculiar novelty instrument called the Humanatone or nose flute.

On drums and percussion:  Keith Levreault

Keith received a BA in Music from Westfield State College in 1987 but has been playing professionally for almost 20 years. He studied privately with Alan Keith Dawson, and toured and recorded in the U.S and Europe with many artists, including Freedy Johnston, Kevin Salem, Blood Oranges and Michael Gregory. In addition to Klezamir, Keith plays with Love Bomb, a wedding band, and gigs and records with many other area bands.