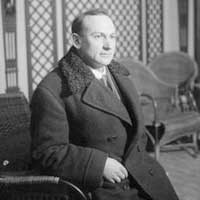 Joseph Achron (May 13, 1886 – April 29, 1943) was a Lithuanian born Russian composer and violinist of Jewish origin, settled in USA. His preoccupation with Jewish elements and his desire to develop a ‘Jewish’ harmonic and contrapuntal idiom, underscored and informed much of his work. His friend the composer Arnold Schönberg described Achron in his obituary as “one of the most underrated modern composers”.

Achron was born in Lozdzieje, Poland (now Lazdijai, Lithuania) and began the study of the violin under his father, an amateur violinist, at the age of five. His first public performance followed three years later at age seven in Warsaw. This was followed by a prodigious childhood career including performances throughout Russia. Between 1899 and 1904 he studied violin under legendary teacher Leopold Auer and composition under Anatoly Ljadovat, at the Conservatory in St. Petersburg.

He joined the Society for Jewish Folk Music (formed in 1908) in 1911 and from that point occupied himself in theory and practice with the Jewish music tradition. His first ‘Jewish’ work ’’Hebrew Melody’’ became immediately recognised through the interpretation of violinist Jascha Heifetz. In 1913 Achron became the head of the violin and chamber music departments at the Kharkiv Conservatory in Russia, and served in the Russian Army between 1916 and 1918. In the years after World War I he toured extensively as a concert artist in Europe, the Near East and Russia, performing over 1000 concerts between 1919 and 1922. During this period he was appointed head of the violin masterclass and chamber music department at the Leningrad Artists’ Union. In 1922 Achron moved to Berlin, where he, together with Michail Gnesin, ran the Jewish music publishing company “Yivneh”. In 1924 Achron spent some months in Palestine.

In 1925 he emigrated to the United States and settled in New York, where he taught the violin at the Westchester Conservatory. He performed his Violin Concerto No. 1 with the Boston Symphony Orchestra in 1927. His incidental music suite from H. Leivick’s The Golem, also written during this period, was chosen by the ISCM for performance in Venice in 1932. In 1934 he moved to Hollywood, where he composed music for films and continued his career as a concert violinist. He performed his Violin Concerto No. 2 with the Los Angeles Philhamonic Orchestra in 1936 and his third (commissioned by Jascha Heifetz) with the same orchestra in 1939. Atonality and polytonality are among the techniques used in his later works. He died in Hollywood, CA in 1943.

He was the brother of the pianist and composer Isidor Achron, who became Jascha Heifetz’s accompanist.