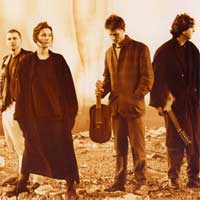 Directed by Belinda Sykes, this London-based British/Israeli/Irish/Arabic ensemble has been playing since 1990. Now well-established, they are particularly interesting for the way in which they imaginatively push, and often transcend, the limits of what is often thought of as early music.

They were the first medieval band to develop an programme of songs entirely devoted to Mary Magdalen, and they were pioneers in programming medieval Jewish and Arabic texts for otherwise more-commonplace Iberian and Crusades programmes – their Crusades programme (The Scimitar and the Sword) represents the voices of Judaism and Islam alongside the Christian viewpoint, and their Arts Council-award-winning programme of medieval Hebrew/Arabic/Spanish song (Dreams of Andalusia) includes songs by medieval Arab-Andalusian poets and Spanish-Hebrew poets.

Their work focuses on connecting ancient and traditional musics but, rather than create a ‘fusion’ or a surreal mix of these styles, they aim to use their combined experiences (upbringings drenched in traditional Irish, English, Maghrebi, Balkan and Middle Eastern music) to create a homogenous sound – Joglaresa members spent years in North Africa and the Middle East absorbing the best traditional tunes, learning the local languages (Arabic and Hebrew), and even intermarrying!