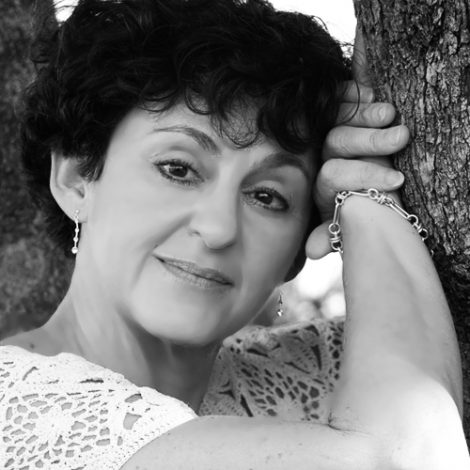 Whether accompanying herself on guitar and lap-harp or singing a cappella, Jill Rogoff brings to her audiences a rich tradition of music from around the world. Originally from New Zealand, she currently lives in Jerusalem, and has mined the musical heritage of many cultures. Her repertoire embraces traditional Celtic and British Isles songs, Jewish music from many communities, early music, and contemporary material that also includes her own songs. For many years, Jill has appeared at the Jacob’s Ladder Folk Festival(the national folk-music event in Israel) and the Abu Ghosh Vocal Festival; in 2006, she featured at the International Festival of Bards. She has featured on several radio and television programs in Israel, North America, Great Britain, Germany, Spain and New Zealand. While she usually sings solo, she has also sung with many musicians in Israel, Great Britain and Europe.

Jill also sets to music poems in several languages. One setting was chosen as the theme music of a documentary about Beit Agnon in Jerusalem, a meeting-place for local writers, and in 2004 she was commissioned by Ben-Gurion University of Beersheva (Israel) to set to music a poem by R. Yehuda Halevi.

In 1998 Jill sang Schubert lieder in a series of concerts in Israel, and has continued her classical music studies with Judi Axelrod, Neil Jenkins, Philip Griffin, Evelyn Tubb and Anthony Rooley of the Consort of Musicke, Poppy Holden and Margaret Peckham. Her study of early music has continued with participation in international workshops with members of The Dufay Collective, Vivien Ellis, Sirinu, Shira Kammen, members of The Boston Camerata, Marcin Bornus-Szczyciński, Oswald Hebermehl, Bari Moscovitz-Seidelman and Jiří Hodina.

Her tours in the United States of America, Europe, Australia and New Zealand have all been highly successful and she is already planning further trips for 2008. Jill has given five sold-out concerts in recent years at the prestigious Abu Ghosh Vocal Festival near Jerusalem; in one of her appearances there in 2005, she collaborated with Israeli cellist Adiel Shmit in an unusual program of Bach and traditional Sephardic songs. She returned to the Abu Ghosh Vocal Festival in spring 2007, with a program of Franco-Flemish Renaissance music (inter alia) with viola da gamba player Amit Tiefenbrunn.

In recent years, Jill has taken some of her programs into private homes (parlour concerts) throughout Israel. She continues to prepare new solo concert programs (see the Concert Programs page on the Menu) while taking her other programs around Israel and other countries.

She has recorded six solo albums to date. Through An Open Door, released in 1990, features a range of traditional songs from England, Ireland and Scotland. The Celtic Cradle, released in 1995 in North America, is a rare and varied collection of traditional lullabies. The album was honoured in 1995 with the Gold Seal from NAPPA, (the National Parenting Publications Awards) and the Parent’s Choice Silver Honour Award. Most of the songs are sung in the original Celtic tongues (Gaelic, Scots Gaelic, Manx, Welsh, Cornish and Breton). Her third solo release, in 1997, is Across the Narrow Seas. This collection focuses mainly on Ireland and Scotland, but also includes Jill’s setting of a poem by the late Poet Laureate of Britain, C. Day-Lewis. The King’s Well, released in 2003, features some of her own songs and poem-settings. A non-commercial, live album, In the Heart of Winter [2006], presents songs by the late singer-songwriter Ray Scudero and other contemporary writers. Jill’s acclaimed fifth commercial album, The Voice of the Wanderer [2006], showcases traditional Jewish music from around the world in several languages. See the Albums page on the Menu for details and ordering information.

An album of new love songs in LadinJudeo-Spanish — on which Jill sings five tracks — was released in Israel in 2002, to international acclaim. Di Ke No Es Tadre [Say It’ Not Too Late] features poems by Matilda Koén-Sarano set to music by Avraham Reuveni. (For ordering the album, see the Albums page on the Menu.)

Jill was a founding member of the IFS, the national folk music association in Israel. She has been editor of its monthly publication, FolkNotes and continues to write for it. In 2002, she helped to form Nevel: The Jerusalem Harp Network. (See the Menu for details about this non-profit organisation). As part of her involvement with Nevel, she is studying to become a therapeutic musician, through a respected course in the USA directed by Laurie Riley.

On the ethno-musicological side, Jill has completed a unique compilation of Jacobite songs, incorporating 302 songs in English, Lallans, Scots Gaelic, Gaelic, Manx Gaelic and Cornish, which she hopes to see published in the near future; another recent project was the preservation of some rare traditional French songs. She is helping to preserve for posterity some little-known macaronic Jewish songs from the Balkans, and has been invited to do the same for the repertoire of para-liturgical music of the Italian Jewish community.

The Voice Of The Wanderer