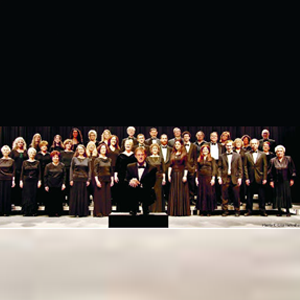 The Jewish People’s Philharmonic Chorus (JPPC) is a New York City-based audition chorus dedicated to preserving and fostering a love of Yiddish music. In their unique mission, the JPPC performs strictly in Yiddish, rediscovering and reinterpreting traditional works from the Eastern European shtetl, as well as new songs with a contemporary sound.  Interestingly, most of the Chorus at this point does not understand Yiddish.  The texts on the sheet music are all written with English letters, the singers are all provided with word-for-word translations, and mp3s are provided to help with the pronunciation (as well as the music, for those who aren’t as fluid at reading music).  When the JPPC performs, English translations are always provided.  At this point, much of the JPPC’s audience is younger;  and the combination of the translations given, with the JPPC’s manner of performing leaves the Yiddish-challenged in the audience feeling like they understood everything.

Founded in 1922 as the “Freiheit Gezang Farein,” the JPPC began as a musical expression of the Jewish labor movement. It has evolved into an intergenerational chorus with a solid reputation as an interpreter of a wide range of choral material.  One of the longest regularly performing Yiddish choruses in North America, the JPPC currently has around 40 members, as well as a smaller chamber ensemble for special events. From 1960-71 – The JPCNY merges into the JPPC

Zingt! A Celebration of Yiddish Choral Music, the JPPC’s first CD, was released in 2006. Committed to bringing Yiddish music into the 21st Century, this CD continues a long tradition of recordings that began in 1948. Generous donations to the Chorus by individuals and foundations provided the impetus for this project.  The CD includes “Reb Dovidl,” “Shoyshanas Yaakoyv,” “Vaserl,” and much more.  In addition, a live-in-concert DVD has been released of a 2007 concert the JPPC gave focusing on the works of the two great Yiddish songwriters, Warshawsky and Gebirtig, including songs like “Afn pripetshik,” “Akhtsik er un zibetsik zi,” “Es brent” & “Di mizinke oysgegebn.”

Binyumen Schaechter has conducted the JPPC since 1995.  If you would like to be placed on their mailing list, audition for the chorus, or to send a tax-deductible contribution, you can contact them for more information via their email address [email protected].

For their 2012 gala concert entitled Bridging Two Worlds: A Yiddish Musical Journey, the Chorus revived an old JPPC tradition – preparing a special keepsake Journal that was given to all who attended the concert, which had photos and bios of all the singers, the full program of the concert, articles about the Chorus and its history, and ads taken out by individuals, businesses and organizations, to honor a current JPPC member, to remember one who has passed, and/or to promote a business or an organization.  We have continued the tradition each year since then.