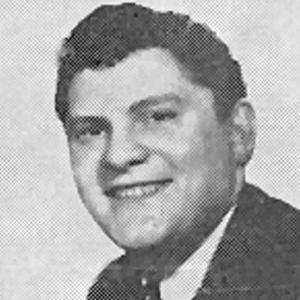 Jan Bart – January 26, 1919 – August 12, 1971  was a prominent Jewish-American lyric tenor, humorist and raconteur who bridged the gap between the wonderfully rich music of European Jewry and American musical tastes.

Bart was born Avram Sholom (Sol) Strauser in Sambor, Poland (now Sambir, Ukraine). His family owned a bakery, and as a very young child, he would stand on a stool and sing to the customers. By the time he immigrated with his family to America in 1930 at age 11, he had already become a cantor and continued singing at religious services at various synagogues in Greater New York area.

At age 17 he wanted to become a contestant on the renowned Major Bowes Amateur Hour radio show, the American Idol of its day and one of the most popular programs broadcast in the United States in the 1930s and 1940s. When he could not get an appointment, he and his high school friend Sid Bernstein went to the offices, found a piano, and accompanied himself to an aria from Pagliacci. Major Bowes walked in and was so taken with his voice that he completely changed the following Sunday’s scheduled program to put him on. He won the contest and with it the opportunity to travel around the country with the Major Bowes’  touring group, thus supporting his family during the Depression. From there he went on to appear in nightclubs, cabarets, and theaters throughout the United States, including the Copacabana in Miami Beach, the Latin Quarter in New York, the Last Frontier in Las Vegas and New York’s famed Palace Theater.

Having been rejected from the Army for medical reasons, he contributed to the war effort by helping to sell War Bonds and singing for the troops.

Bart recorded for RCA and Columbia among others, including a rendition of “We’re in Love, We’re in Love” with the Ray Charles Chorus, and later under his own label, Janson Records. He was a member of ASCAP (The American Society of Composers, Authors And Publishers) starting with his own composition, “Ecstasy” that he penned at age 20.

Through the 1940s and ‘50s he was a regular on Yiddish radio shows, including the American-Jewish Hour, Yiddish Melodies in Swing’‘ and The American-Jewish Caravan of Stars on WHN and WMGM radio, along with the likes of the Barry Sisters, Molly Picon and Mickey Katz, with famed composer Abe Ellstein at the baton. His “Jan Bart Show” on WEVD radio in New York ran for 18 years and his “Jan Bart Show’ on WATV-TV for six. His many television appearances included the Milton Berle Show and the National Muscular Dystrophy Telethon with Jerry Lewis. He starred in the Yiddish film “Catskill Honeymoon” in 1950.

When Israel became a state in 1948, Bart truly found his calling. He gave up his nightclub career to devote his whole life to the establishment and preservation of the State of Israel by working tirelessly for Israel bonds throughout the United States, Canada, Europe, and Australia. In the early days selling Israel bonds meant riding along the boardwalk in the back of an open station wagon, pleading into a megaphone the lessons of the war, that the existence of the State of Israel was central to the survival of the Jewish people.

In the early 1950s, while appearing in Miami Beach, he was asked to sing at the very first organized Israel Bond meeting. As gifted as he was a singer, he was an even better fundraiser, melding stories with his songs. His humor portrayed the new experiences of Jewish émigrés and stories from the mamaloshen. As Israel bond rallies developed into the organized, pre-sold events they are today, he always doubled and tripled the expected return. By his death at age 52 in 1971, he had raised more money for Israel Bonds than any other entertainer, having appeared at more than 2,200 performances over 20 years.

Throughout his life he continued to use his cantorial skills, conducting High Holiday services at the Riverside Plaza Hotel each fall and returning to the “Borscht Belt” (the Catskill Mountains of New York), where, like so many Jewish entertainers, he had gotten his start, to conduct Passover services at Green’s, Brown’s, Young’s Gap, and the Windsor hotels.

Through the 1950s and 60’s he made several recording albums, including Yinglish, old Yiddish melodies sung in English, and Fiddler on the Roof in Yiddish (see discography), for which he wrote the Yiddish lyrics. He published his biography with Barney Rubin, I Lost a Thousand Pounds (Oceanic Publications).

He was a popular entertainer at weddings and bar mitzvahs, and there wasn’t a family simcha that he and his wife, Lillian, didn’t sing for. He officiated as cantor at just about every family wedding. He wrote individual anniversary songs for each occasion and sang “When did she get to be a beauty?” for every wedding and “When did he grow to be so tall?” for every bar mitzvah.

In 1941 Bart married singer Lillian Robbins, an operatic contralto, who performed as a soloist at Radio City Music Hall. Their children are Judy Bart Kancigor (1943- ) food writer and author of “Cooking Jewish (Workman Publications) and Gary Bart (1946- ), Weight Watchers founder in Orange and San Diego Counties and film producer (“In the Name of the People” and ‘Invincible”). Lillian died in 2010 at age 93.

Bart died at age 52 in 1971 from complications of diabetes. He is interred at Mt. Ararat Cemetery in Farmingdale, NY.