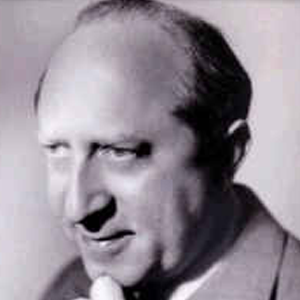 Not only did this handicap become a kind of trademark, but Jacques turned it into an asset.

It certainly didn’t stop him enjoying a good game of tennis!He was also an excellent billiards player (member of the Vingeroed Team of Champions).

His brother was to follow in his footsteps,later on.

Jacques was also a big football fan, supporting the Anderlecht team every Sunday.

The biggest match was Anderlecht vs. Beerschot, as the latter was his brother’s club.

During the First World War, the Kluger family emigrated to Holland. On his return to Antwerp, Jacques studied at Athenee Royale.

He spoke perfect Flemish, French, English, German and Yiddish (the latter was to serve him well in subsequent business trips to the USA).

He met his future wife, Adela Rozenbaum,at the age of 14 when she came to Antwerpto work as a diamond-cutter. They married in 1935.

Jacques Kluger studied diamond cleaving for one year but was not bitten by “the diamond bug”.

His heart was already set on music.

At the age of 18, he formed an amateur Jazz orchestra by the name of “The Collegians”, inspired by his idols, Ellington and Calloway.

He also signed a deal with Flemish Radio as presenter of the very first Jazz program – the first of its kind! The program was broadcast fortnightly.

In the company of his Jazz orchestra, Jacques won most of the competitions of his time, from Scheveninghe to Brussels (Palais des Beaux-Arts).

The other members of the band were Johnny Claes and Louis Dehaes, on trumpet, Pinto, on piano, Rene Goldstein on bass and Johnny Kluger on drums.

In the Summers of 1932 and ’33, Jacques spent his vacations with his uncle, in Germany,where he witnessed the rise of Nazism.

He organized a series of Jazz concertsin Antwerp and Brussels.

Topping the bill were such names as Duke Ellington, Louis Armstrong and Cab Calloway.

This was a first for Belgium!In 1936, Jacques and his Jazz band supported a young singer who was later to become a huge star – Charles Trenet.

During this period, right up until the war, Jacques Kluger played every week-endin St.

Anneke then at Antwerp’s Chantilly.

When the war broke out, his family took off for Clermont-Ferrand, inside the unoccupied zone.

At first, they intended to leave for the United States of America.

However, after a while, it looked as if the war was easing off,and they went back to live in Antwerp,where Jacques started organizing tourswith various artists including Tohama.

He had been denounced for havinglistened to songs on the BBC.

Musician and owner of the famous club “Bœuf sur le Toit managed to set them both free.

Meanwhile, Johnny Kluger was imprisonedn Drancy from where he later managed to escape.

In November 1942, noticing an increase in police identity checks and raids,Jacques Kluger decided to take his whole family to Switzerland.

He used money donated by his cousin, Neutel, to pay smugglers.

Slipping through an identity control, on their way to Lyon on a livestock train, they finally arrived at their destination.

Some of the family members made their way to Switzerland.

Jacques and his immediate familyheaded for the Ardèche region (Villeneuve de Berg), where his second son, Roland,was born on April 12, 1943.

They stayed there until June 1944.

As soon as the first American troops arrived in the region of Ardèche, Jacques took an army truck up to Antwerp, along with his brother.

When he met up with Felix Faecq again, the latter offered him a partnership in the music publishing company entitled WORLD MUSIC Company (13 Rue de la Madeleine, Brussels).

They started up a Jazz club named “Victory”, especially for the GIs.

Gus de Loof was a regular feature in this new venue.

They finally managed to make the move in March 1945.

Together with Felix Faecq, Jacques Kluger started the “Victory” label, which went on to sign Ray Ventura featuring a new singer by the name of Henry Salvador.

At this time, Jacques’ activities became more and more manifold.

Working for the American GIs in Germany as an entertainment agent, he met the Englishman, Alex Sallon.

The latter went on to become a good friend and later introduced Jacques Klugerto Ted Heath and Vera Lynn.

Soon after, Jacques became the representative of the Marshall radio broadcasting plan.

He brought an American troop, “Black and White”, to Brussels.

Unfortunately, it was less successful than anticipated.

In 1947, Jacques became publisher and producer for Bobbejaan,who went on to become Flanders’ major star in the Fifties.

He organized tours in all manner of venues,including regular concert halls, marquees and Brussels’ Folies Bergères (which has no connection with the Parisian venue).

Ten years of success followed for this winning partnership.

In 1948, he started traveling regularly to the United States, bringing back impressive catalogs.

In this way, he was the first to import the albumsbrought out by this famous record company(now a member of Universal).

Also in 1949, Jacques Kluger took a recording made with the Belgian pianist Joe Heyne(“La Petite Valse” (The Little Waltz)) on a trip to the United States.

The title went on to be a successin the U.

: over 200 subsequent recordings were made.

Jacques repeated this exploit with the song “Many Times”, sung by Eddie Fisher (Marylin’s husband) and “You You You”, interpreted by The Ames Brothers.

All these European hits made it into the American charts.

His friend Bobby Mellin asked him to rush to Germany and record a single with Vic Damone (then a soldier).

The next day he cut “Here In my heart which became a huge hit In the US.

Jacques introduced a young man he had recently auditioned to Philips records.

As Kluger did not have a publishing company in Paris, he recommended the young Brel to his friend, Rudi Revil, who had just established a publishing business.

The rest is history…Jacques Kluger produced a series on the theme of Jazz in Europe, for Bally Records.

He took the famous French accordeonist,Marcel Azzola, to London to record the “The clown on the Eiffel Tower” with a large orchestra.

In association with Faecq, he established the PALETTE record company.

The first artists in their books were the well-known German pianist, Peter Kreuder, and Ted Heath’s arranger,Reg Owen, who went on to release an international hit with “Manhattan Spiritual”.

This latter success really made PALETTE.

Then followed “Kili Watch”, by The Cousins, and songs by Will Tura, including the famous Eenzaam Zonder Jou.

He produced the German version of “Pub With No Beer”, with Bobbejaan, which was a huge success.

Over In New York, with Felix, they started Zodiac music manage by George Lee and later by Irwin Robinson.

With Madame Legrand (the mother of Michel Legrand, who was a great friend), Jacques started up “Editions Vendôme”, in Paris.

This went on to be very successful.

Soon after, he entered into an agreement with Rolf Marbot.

Their affairs were to be managed by Huguette Ferly, who later married Jacques’ oldest son, Jean.

A number of hits came out of this enterprise, including songs by The Chackachas, When (from Kalin Twins, Tequila and Lullaby Of Birdland, to name a few.

He bought these songs for the world except US.

All of the band’s songs were in the catalog.

Next, he established Thames Music,with Cliff Adams (“Sing something simple”… (a BBC program).

He also produced the Swedish star, Alice Babs with Ulrich Neuman ;They enjoyed fame alongside Steve Asmussen, after they exported them onto the US market.

At this time, he produced the first English albumof a young American who became well-known a short timelater under the name of Lemmy Caution – a.

He took a little Belgian girl by the name of Annie Cordy to Germany; she was already big in Paris.

He also recorded an album with a young American singer who went on to become the biggest female Gospel star: Della Reese.

At this time, Kluger also fulfilled his dream by cutting a record of all the grand Yiddish songs,interpreted by a symphonic orchestra.

The songs were arranged by Benedict Silbermanand recorded in Holland.

These two albums, released with Capitol,were a huge success.

Thanks to his piano-playing mother, he had recalled all the major Yiddish folk songs and brought them together in a comprehensive volume.

In 1957, Jacques Kluger met a classic pianist by the name of Alexis Weissenberg, nicknamed “Sigi” They produced two albums together; one was a piano adaptation of “My Fair Lady”, the other was a collection of virtuoso works.

Published under the name of Mister Mistery, this work later featured in this great pianist’s major works.

One of the records was about Paris,the other about Rome.

Both were composed by Capitol’s two bosses,Dave Dexter and Pete Cavanaugh.

At the same time, Kluger also produced various songs(for Polydor), with Helmut Zacharias (Tipsy Piano),Jil & Jean (who went on to discover Johnny Halliday), and Jean Walter (who created the famous song “Tulpen uit Amsterdam” (Tulips of Amsterdam) based on an idea put forward by Jacques Kluger himself.

Still in 1957, Kluger made three albums with Ray Martin (England’s number one arranger at the time) These were the very first stereo Siemens recordings.

In the same year, his son, Jean, came to work with him.

Jacques Kluger’s second son, Roland, came to work with his father and brother at this time.

He established Madeleine studio (in conjunction with Roger Verbestel)where many hit songs were recorded.

Jacques Kluger hired two very distinguished Belgian men to work with him in his publishing company.

Their names were Willy Albimoor and Henry Segers.

He spent some time in Hooghe Vuursche, in Holland, then in Lamalou Les Bains, in France.

He carried on supervising WORLD MUSIC until he died, on March 26, 1963, after a long and painful illness.

In Germany, he worked with lyric writersErnst Bader – Neukirchner and Fritz Rotter.