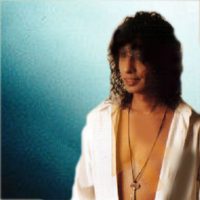 If Yardena Arazi is the first lady of the “Kdam”, Izhar Cohen is the golden boy.

In 1982 he sang the song “El Haor” (To The Light) with Ya’arit Ben-Ya’acov, daughter of Shimrit Or. Izhar Cohen didn’t give up even though he lost in that “Kdam” (7th place) and he came back successfully in 1985 when he won the “Kdam” with the song “Ole Ole” (Going Up) which gave him a respectable 5th place in the Eurovision Song Contest, held that year in Sweden. Izhar is actually the only Israeli who have won two Kdam contests.

In the 1987 “Kdam” he competed, with the help of his sister, Vardina Cohen, with the song “Musica Hi Neshika Lanetzach” (Music Is a Kiss Forever), but the couple came only fifth. The Cohen brothers co-operated again in the 1989 “Kdam” when Izhar wrote the song “Shvil Hazahav” (The Goldan Lane) for his sister Vardina.

Izhar came back again in the 1996 “Kdam” with the song “Alpaim” (Two Thousand) that climbed only to the 9th position.

Representing Israel, he won the 1978 Eurovision Song Contest with the group Alphabeta performing “A-Ba-Ni-Bi” with music by Nurit Hirsh and words by Ehud Manor. The title of the song is the Hebrew word “ani” (first person singular pronoun) expressed in the popular children’s code “B-language”.

Cohen was an actor in the Haifa Theater.