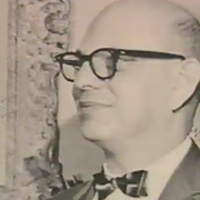 Portrayed by Readers’ Digest as “a top ranking composer,” Christian Science Monitor, New York Times as “a leading Israeli educator and composer,” Variety: “as one of the top composers,” and by Ascap Today as “a major force in today’s liturgical music,” Issachar Miron, has made a name for himself throughout the world as a top talent, composer, poet, writer, creative mind, filmmaker, and a master photographer

He was born in Kutno, Poland, in 1920. Miron’s mother, Haya Helen Elbaum-Michrowski an accomplished amateur pianist, died in the bloom of her life in 1927 at the age of thirty-six, when he was 7 years old. His father, Shlomo Michrowski, a proprietor of a local haberdashery store and, by training, an ordained rabbi as well as a gifted violin virtuoso, endured inhuman suffering in the winters of 1941 and 1942 in the Kutno Ghetto, officially named by the Nazis, “Judenlager Konstancja,” along with his family and some 7,000 Kutno Jews.

Cooperating with the Nazis, the Kutno Polish mayor, Burmistrz Krzeminski, issued, on December 8, 1939, a decree ordering Jews to wear a yellow “Star of David” on the right side of their chest.

This short-lived ghetto became instantly an inferno of disease, starvation and corroding degradation. In March 1942, virtually all Jews of Kutno perished in Chelmno, on the river Ner—the first Nazi death camp of the “final solution for the Jewish question.” Their holy remains were buried in the nearby Rzurzowski Forrest; in ditches they were forced to dig prior to being shoved into the poison vans. There are no survivors to tell us their unutterable story. May their memory be blessed forever, and their martyrdom live on as the never-to-be-forgotten testimony of this most horrible crime of crimes in the recorded human history, committed not by ferocious savages, but lamentably, by Germany–a country which contributed so immensely to the world’s culture. This might have been instigated by Germany’s institutional Anti-Semitism, and Hitler’s subsequent rise. His lunatic leadership unleashed its venom mostly against Jews, even against Germany’s very own citizens, including, such epochal giants such as Einstein, Heine and Mendelssohn.

After his discharge from the Jewish Brigade of the British Army, where Issachar Miron served during War II, he settled in Palestine. There he continued his burgeoning creative work as a composer and writer and a film-documentaries director and producer. Miron steadfastly made every possible effort to advance his education by voracious reading and attending numerous classes in psychology, music, law and linguistics.

When the State of Israel was established, Miron was named the National Deputy Director of Music, assisting Frank Peleg, the world-renowned piano virtuoso, who served as the National Music Director for Israel’s Ministry of Education and Culture and also appointed as the National Officer-in-Chief of Art and Music programs for the Israeli Defense Army. At this capacity he introduced his concept of “integration through singing” for soldiers from different countries and cultures, which was portrayed in an article by Oscar Schisgall, entitled “The Sound of Singing in Israel” of May 1961 Readers Digest. In the United States, Miron served as Chairman of Music Faculty at the Jewish Teachers Seminary and the Herzliah Teachers Institute, both in New York City.

Miron is an Ascap’s Deems Taylor Award winner for creative writing, and a winner of the Israel Engel Prize for Music. The American musicologist, Dr. Rudolf Ganz, included, in his revision of the Hutcheson’s Literature of Piano, and his Clavier treatise, “Contemporary Piano Masterpieces,” two of Miron’s piano works: Seven Syncopated Preludes and Passacaglia for Moderns. These compositions were highly commended by Arthur Rubinstein and recorded by Frank Peleg. Miron’s CD “I Remember,” which contains 6 poems for cello and piano, was recorded by Jasha Silberstein, the principal cellist of the Metropolitan Opera, with Tsipora Miron, piano. This eloquent masterpiece released by the Musical Heritage Society Inc., under the direction of its musicologist and president, Dr. Michael Naida.

Robert Sherman, of the New York Times radio station WQXR, described Miron’s work in his program on the rejuvenation of the instrumental Klezmer music, as a “marvelous achievement.” His Klezmer music is represented, among others, on 2 CDs: “The Art of the Klezmer,” recorded by a leading clarinet virtuoso, Giora Feidman, with Feidman’s Trio and orchestra and conducted by Issachar Miron. Miron is a laureate of the Cantors Assembly of America KAVOD AWARD for his “immense contributions to Jewish liturgical music” and a winner of multiple prizes for poetry. The Musical Heritage released four of his liturgical cantatas for children’s choir and orchestra.

Miron’s coast-to-coast telecast, Golden Gates of Joy Oratorio, and his Cantata, Song of Esther with lyrics and libretto by Abraham Soltes, were performed by the Ray Charles Singers on over 300 CBS affiliated TV stations, and were chosen by CBS for international syndication because of “an extraordinary listeners’ response.”

His song, “Ufi Ruach,” with lyrics by Aaron Ashman became the first Hebrew song to be broadcast on Egyptian radio, in the aftermath of 1977 peace talks of Anwar Sadat, president of Egypt with Menachem Begin, prime minister of Israel. Miron was the National Director of Special Educational and Inspirational Programs for the National United Jewish Appeal, scripting, composing and directing numerous motivational radio, TV programs and prize-winning films, videos and multi-media shows, community concerts and full-fledged musical and dramatic shows that played in the 70’s and 80’s around the country before the largest American Jewish audiences in history. In the 60’s Miron was the Music Director of the America- Israel Cultural Foundation in Israel and the U.S.A.

His book, “Eighteen Gates of Jewish Holidays and Festivals”, with an introduction by Elie Wiesel, epilogue by Rabbi Irving Greenberg and an introduction “From My Angle” by the Israeli poet-laureate: Haim Hefer, features a wealth of contemporary poetic meditations, music and prayers. The Jewish Book Club selected it as its MAIN SELECTION. According to Eli Wiesel, “There are poetic alliterations in his music and musical resonances in his poetry, brightening his personal voyage of discovery into Jewish holy days with passion, warmth and wit.”

During the seventies, Issachar Miron arranged and recorded, with Theodore Bikel, choir and orchestra, underground Jewish, protest songs from USSR, entitled “Silent No More,” proceeds of which go to The Hebrew University of Jerusalem’s Bikel / Miron Scholarship Fund for students from former Soviet Union and other countries. In 2000, ASCAP honored him, “in recognition of his manifold achievements as composer, author, educator and distinguished international citizen.

Issachar Miron lives in New York, N.Y. with his wife of 67 years, Tsipora, a concert pianist, who served on the faculty of the Music Academy in Tel Aviv, Israel. They have 3 daughters: Ruth, a concert pianist, married to Dr. Michael Schleider; Shlomit, a social worker and human resource director, married to Itzik Aviram, an electric engineer in a nuclear plant; and Miriam, a lawyer, married to Chet Lipton, a corporate lawyer. The Mirons have seven grandchildren: Jennifer and Daniel Cubell, Jeffrey Schleider, Scott Sholem, Julie Sholem, Zachary Lipton and Gabrielle Lipton. Issachar Miron is listed in Encyclopedia Judaica (Jerusalem), Who’s Who in the East (U.S.A.), Who’s Who in Israel, Who’s Who in ASCAP, Who’s Who in ACUM, AGAC Directory, Who’s Who in World Jewry, the International Platform Association Directory U.S.A., and The New Grove’s Dictionary of Music and Musicians, etc.