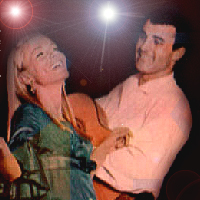 Ilan and Ilanit started their career in 1965 at the “Musichall” which toured Europe. The crowd there well received the Blond girl and the blach hair guy, and soon they received positive feedback also in their homeland. Ilan, whose real name is Shlomo Zach, now manages the careers of Ilanit and many other singers, and prefers to concentrate on the business side of the music industry.

As a soloist, Ilanit has released many successful albums in Israel and Europe and her hits include Eretz Eretz, Bashana Haba’ah, Kvar Acharei Chatzot, Ahavata Shel Tereza Dimon, and Shir Al Nechalim. She was named Israel’s top female singer every year from 1971-1977 and has represented the Jewish state in song festivals and competitions from Brazil to Greece to Japan.

In 2005, she celebrated a milestone – 40 years of performing – and was honored by her peers with a special tribute concert.

Ilanit wanted her former singing partner to perform with her during the 40-year anniversary concert, but he declined. “He says he’s not able to sing anymore,” Ilanit recalled. “We wanted him to come on stage but he said, ‘Listen, I cannot sing. Please don’t do it.'”

In 1973, Ilanit made history by performing Israel’s first Eurovision Song Contest entry, Ey Sham (Somewhere), in Luxembourg. The song, composed by Hirsh, placed fourth, and for the next 20 years, held a Eurovision record as the highest debut for a competing country. However, Ilanit feels Ey Sham could have placed higher.

“I had a big argument with Nurit Hirsh,” she said. “She wanted to start the song with something artistic and mysterious, and I said we should attack and start with the refrain. When you have only three minutes to perform a song, you have to attack in those three minutes – there’s no time for something artistic. That’s what the singer for Luxembourg (Anne-Marie David) did, and they came in first. But Nurit said, ‘No, no, I know what I’m doing.’ So we came in fourth.” Despite that disagreement, Ilanit and Hirsh continued working together and remain close friends.

Ilanit represented Israel again at Eurovision in 1977 in London, where she performed Ahava Hi Shir Lishnayim (Love is a song for two), which placed eleventh. She was supposed to represent Israel a third time in 1984 with Balalaika, but the Israel Broadcasting Authority withdrew the entry when that year’s Eurovision organizers scheduled the competition on the Remembrance Day.

Although she is firmly rooted in Israel, Ilanit – born Hanna Drezner in Tel Aviv in 1947 – spent most of her childhood halfway around the world – in Brazil.

“My mother had two uncles there who said it was a good place to build a future and it was a rich country,” said Ilanit. Her family moved to Brazil when she was five, but returned to Israel when she was 12. “My father wasn’t happy,” Ilanit said. “He was used to being close to his family and friends and he felt lonely there. He was a tailor and he had a lot of work, but he felt his place was in Israel.”

Ilanit’s parents left Poland in 1939 and arrived in Palestine aboard a ship that eluded the British authorities, who severely restricted Jewish immigration. Her parents came at the request of her paternal grandfather, who immigrated in 1932 and wanted his children to join him. Ilanit’s father and four of his siblings did so, but the other three remained in Poland and perished in the Holocaust.

Ilanit’s mother also lost much of her immediate family, with the exception of one brother who survived Auschwitz.

Her family’s losses during the Holocaust weighed on her when a German record company offered Ilan and Ilanit a recording contract.

“Going to Germany was a delicate subject, so I went to speak to my mother,” said Ilanit. “She said, ‘You know what, you should go. I’m sure Germany has changed, and you should think about your future and not think about the past.’ So I went, but it was strange because every time I saw an old man with one leg or one arm I thought, ‘He was probably a soldier in the Wehrmacht.’ It was a strange feeling, but we were welcomed in such a warm way by the record company and the producers.” “I want to bring happiness to people”

Today, Ilanit – who, in addition to Hebrew and English, also speaks Portuguese, Spanish, French, and some German – lives with her husband of 27 years in Kfar Shmaryahu and is active in social causes. For example, during the summer war, Kfar Shmaryahu hosted 100 northern families, for whom Ilanit and other residents bought groceries and other necessities.

However, Israelis will never hear Ilanit express her political beliefs through music. “Music is supposed to make people happy and make people forget about troubles and politics,” she said. “I don’t like to interfere – I want to bring happiness to people.”

Ilanit has accomplished a lot in her 41 years on the Israeli music scene, but she wants something more. She has a 31-year-old son from her first marriage and a 29-year-old stepdaughter, and told Ynetnews, “I’m waiting to be a grandmother.”