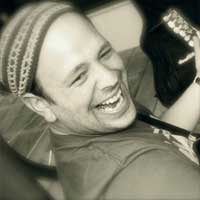 Cantor Gastón is serving at Temple Aliyah in Needham, MA since August 1, 2008. He works very hard to constantly bring music to Temple Aliyah and to get involved in the entire community of Great Boston Area. Check out last year’s concerts.

A native of Buenos Aires, Argentina, Cantor Bogomolni (who is also known as “Cantor Gastón” or “Cantor G”) has been an ambassador of Jewish music for most of his life. A member of the Cantors Assembly, trained in hazzanut from an early age, Cantor Gastón, as a teenager, was sent out from Buenos Aires to outlying Jewish communities in Argentina to lead Shabbat and holiday services. At the age of 18, Cantor G began serving as the only clergy member to the Jewish community in the Dominican Republic; first in Sosúa and later in Santo Domingo. During his fruitful three years in the Caribbean Island, Cantor G was able to develop significant first ever Jewish culture events for the entire general community. Cantor Gastón spent also two years as the Hazzan and Youth Director in Barcelona, Spain, before coming to the United States. While in Spain, Cantor G served as co-producer and the vocalist of the the country’s first Klezmer orchestra, Tikun and developed and presented a one-man show titled “Jewish Holidays: Their Music Through Time.” From 2002–2008, Cantor Gastón served as the Cantor at Beth El Synagogue in Omaha, Nebraska, where he instituted many new and exciting programs in religious services, musical education for all ages, and entertaining shows.

Cantor Gastón is the “T’fillah Music Specialist” of the Solomon Schechter Jewish Day School of Greater Boston where he is infusing lots of Ruach (spirit & energy) and new ways to teaching prayers through music. He is also part of the Tzevet Shirah (Music Staff) at Camp Ramah in New England, and the Cantors Assembly representative to the National Ramah Commission. In 2009 Cantor Gastón worked as the Music Director of the Lower Camp at the Kaleidoscope, Arts & Science Summer Camp at the JCC in Newton, MA.

Cantor Gastón loves to work with all ages, however he has a special love for little ones, and has been entertaining and educating infants, pre-schoolers and toddlers since he is fourteen years old. Whether it is a birthday party, a Tot’s concert, a Tot Shabbat, a storytelling environment, playing piano, hand-drums or guitar, Cantor Gastón makes the event always fun, engaging, creative, and unique! He just recently became certifiied as a Music Together teacher.

A versatile, soulful and energetic artist, Cantor G sings in various languages, styles and for all ages. Cantor Gastón’s Ashkenazi and Sephardic background and training allow him to create a unique spiritual experience at shul and in concerts. In addition to singing with the Omaha Symphony, in Europe, Israel and the two Americas, Cantor Gastón has released various CDs of Jewish music. Cantor G’s CDs are available for sale online at OySongs or CDBaby.

The Spirit Series CD collection produced by the Cantors Assembly and the United Synagogue of Conservative Judaism, has chosen Cantor Gastón’s submission for the third time. The lullaby-style rendition of “Ki Lo Na’e” selected to be included on the CD “The Spirit of Passover, “Shlomit Bonah Sukkah” included on “The Spirit of Israel, vol.2,” and the most recent one a Latin American version of “Tzadik Katamar” for the upcoming “The Spirit of World Jewish Music”. To listen to Cantor G’s selections, just click on the links.

Cantor G, along with Néstor Herszbaum, are the creators of WebParasha, an extraordinary web application that allows congregants to assign, administrate and interact with any Torah and Haftarah portions for any given Shabbat and Holidays.

Cantor G is the president of Tarbut Boston. Tarbut Sefarad is an institution made of people from the area of Barcelona, Spain who share a special interest and sensitivity for the Sephardic and Hebrew culture in all its aspects and has the purpose of promoting activities that deepen in the knowledge and diffusion of the Sephardic culture.

Cantor G has also been very active in the educational network, offering a number of lectures, concerts and workshops throughout the year on Jewish musical traditions, the history of Jewish music, and especially Argentinean and Latin American Jewish Music. In addition Cantor Gastón was a board member of the Karen Sokolof Music Appreciation Fund Committe and the Karen Sokolof Javitch Emerging Composers Competition.