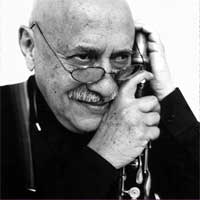 He was born in Buenos Aires, Argentina, where his Bessarabian parents immigrated to escape persecution. Feidman comes from a family of klezmer musicians. His father, grandfather and great-grandfather made music for weddings, bar mitzvahs, and holiday celebrations in the gated ghettos of central Europe[citation needed].

He began his career as the youngest clarinetist ever to play with the Israel Philharmonic Orchestra, and left the orchestra in the early 1970s to begin his solo career. He has performed as a soloist with the Berlin Symphony Orchestra and the Kronos Quartet. He played the clarinet solos for the score to the film Schindler’s List, which won an Academy Award.

Feidman has collaborated and recorded with many musicians, including Ariel Ramirez and the Moroccan Ali Hafid[citation needed].

He also plays the bass clarinet.

The Magic of the Klezmer