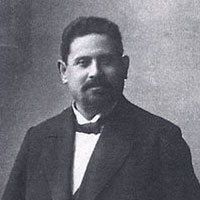 Not without good reason was Gerson Sirota spoken of as the ‘Jewish Caruso.’ Even with the poor quality recordings that we have of him today, it’s quite clear that he had a most extraordinary voice and since he was a contemporary of Caruso (1873 – 1938), the comparison was bound to be made. An apocryphal story has it that Caruso would come to hear Sirota sing or conduct a service whenever, they were in the same town at the same time.

Although at the head of this article it says that he was born in 1873, this is by no means certain, as details of his early life are not well documented.

It would appear that Sirota started his career in Chazanut in Odessa, after which he was Cantor for eight years at the Shtotshul in Vilna. The choirmaster there was the renowned Leo Lowe with whom Sirota built up a fine working relationship.

In 1902 he performed in a concert accompanied by an enlarged choir under Lowe’s direction and the following year he sang at an historic reception that was held in honour of a visit by Dr Theodor Herzl.

Five years later, Sirota was invited to occupy the position of Obercantor in the most prestigious position in the cantorial world at the Tlomazke Street Synagogue in Warsaw and it was not long after that Leo Lowe joined him there.

In 1912, Sirota and Lowe visited America to give concerts, and it’s said, that at his first appearance at Carnegie Hall, on February 14th, every single seat was taken.

He travelled on concert tours all around America and Europe, and was a great ‘hit’ wherever he went, whether he gave a concert, or conducted a service at the Amud.

Although Sirota undoubtedly improvised whilst conducting services, as is common with most Chazanim, he did not compose his own original pieces. ‘Sirota’s Retsei’ is, of course, not Sirota’s at all. Although he undoubtedly contributed towards making it famous, it was actually composed by Schlossberg.

It’s said that when he Davened at the Amud, he would get so carried away in his ‘conversations’ with the Almighty, that for him, it was as if the congregation wasn’t present. Chazan Joshua Weider described Sirota’s appearance after he’d sung ‘Ata Nigleita’ one Neila as ‘a burning thorn.’

Sirota was reputed to have had a generous disposition, and it was not uncommon for him to officiate at the wedding of a poor family for no remuneration. Even so, he did not allow people to take advantage of him and after a dispute with his congregation over his appearances outside the Synagogue, he parted company with them.

It was unfortunate for Sirota that he happened to be in Warsaw at the outbreak of the war. Although he could easily have left, he remained there to be with his family.

Living in the Warsaw Ghetto at 6, Volinski Street, they all died together in the uprising in 1943.