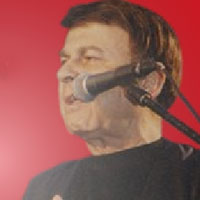 EFFI is known as the “King of Sing Along” in Israel. 35 years ago he invented the method of Singing Along – with slides – that the words of the songs are written on them, and are projected on a big screen. This makes the singing easy, joyful and entertaining. People just love to sing along in Israel, and specially, EFFI is the modern Israeli “Troubadour” !

EFFI produced and directed more than 30 records till now!

He authored 5 song-books. Each containing more than 200 songs. All 5 of them are best sellers!!

EFFI conducts 5 choirs over the country! For more than 35 years he was the musical director of the City of Haifa. He represents Israel – as a musical ambassador of good-will in: Africa, South America, U.S.A., England, France, Holland, Poland etc!!

EFFI won the 1st prize in the Israeli Songs Festival, which is the Radio-Television most important song contest.

The shows he produces, conducts and directs are very successful!

November 2000 – he was responsible for the Concert of the Millenium – which took place in Strasbourg – France. This concert was sponsored by the Ministry of Tourism – and by its Minister, Mr. Amnon Lipckin-Shachak.

On September 2000 – he produced a big Concert, again for the same ministry in the “Ventian” – the newest hotel in Las-Vegas, The concert’s title: “Israel goes Vegas”!