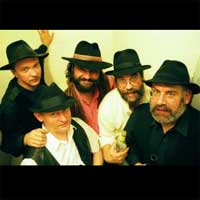 Di Naye Kapelye plays old time Jewish music the way we imagine it was played in eastern Europe both before and after the Holocaust. Learning from Jewish people still living in the region, and from Gypsy musicians who played for them, DNK carries on a living tradition of music.

Yiddish culture in east Europe today is but a dim shadow of its history and legacy, but it is not dead. Jewish communities exist – in diminished numbers – and Jewish life continues, not the least in the memories of an older generation who remember a world which spoke Yiddish. Di Naye Kapelye means “The New Band” in Yiddish. We play old-time Yiddish music from not so long ago.

This is music for dancing, for singing, for celebrating, and for remembering. Di Naye Kapelye approaches klezmer music as a living east European folk music tradition, not as nostalgia. Performances are both energetic and informative, with dance music from east Europe — particularly Hungary, Romania and Moldova, Yiddish folk song, and more recently, reinventions of Hasidic traditional song, all played with attention to each particular regional style.

Formed in 1994 through a number of fortuitous circumstances, many involving liberal quantities of palinka –Hungarian plum brandy – at marathon Hungarian folk dances, founding member Bob Cohen assembled an international group of musicians devoted to digging for the roots of Yiddish music in the Carpathian region. But they didn’t go looking in museums. Fragments turned up in old recordings, were learned from gypsy fiddlers, and confirmed by Jewish folk still living here. Is this how this goes? What instruments would have been used? How did people dance? What did people sing?

A Naye Kapelye concert is a tour of the places, moods, emotions, tastes and smells of a Jewish celebration. It brings you to the rabbi’s table, it speaks of forbidden dancing with Moldavian “sharletankes”, it speaks of whiskey and the misery of life in the Russian army.

Cohen himself began collecting Jewish music in Hungary and Romania in the 1980s as an extension of his involvement in the Hungarian tanchaz or “dance house” movement. Based on field recordings, interviews, and historic recordings, Di Naye Kapelye recreates the sound of the many non-commercial Jewish bands who served Jewish communities in Europe as late as the 1970s. In Hungary, and particularly in Transylvania, Gyspies commonly played music for Jewish communities, and members of Di Naye Kapelye continue to do extensive field research among elderly Gypsy and Jewish musicians, recording and often playing with their teachers, carrying this living tradition into the 21st century.

Di Naye Kapelye is available for concerts, festivals, weddings and other simchas, as well as other collaborations.