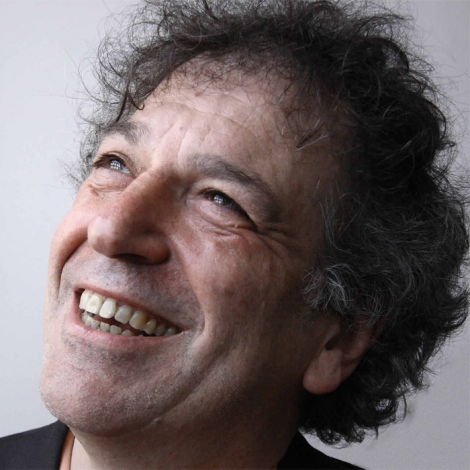 Pianist, composer, storyteller, Denis Cuniot is one of the main instigator of the renewal of French klezmer music. He published to this day around 20 discs, in solo, duo, trio or in a group (in particular with the Orient Express Moving Shnorers that he created in 1995 with Philippe Briegh).

From his first collaborations with the clarinet player Nano Peylet to the Yiddish songs of Bruno Girard (from the band Bratsch), from the jest of the clarinet player Yom to the rock-punk performances of the guitarist David Konopnicki, Denis Cuniot explores since the beginning of the 1980’s the fertile soil of klezmer music. His goal: to make sound a vanished world, and imagining the evolution that klezmer music could have had if it had survived in its original lands ; that music becomes a source of inspiration, invention and improvisation for musicians around the world, true music standards… Like jazz.

Denis Cuniot dares to mix jazz, rock, African music or even Indian iemj.org/…t/biographies/denis-cuniot-1953raga with klezmer music. His unique way of playing the piano is immediately recognizable.

Denis Cuniot, the inventor of klezmer piano in the French way. An exciting program where a man reveals himself through his music…

Pianist of jazz and improvised music, Denis Cuniot is one of the main initiators of the revival and recognition of klezmer music in France.

With a solid background in classical music, Denis Cuniot is at the same time music teacher, director of a music conservatory, and pianist of jazz and improvised music.

From 1983 on, with his encounter with Nano Peylet (clarinet player in the band Bratsch), he becomes one of the main initiators of the revival and recognition of klezmer music in France.

Yiddish is the mother tongue of his mother, Bluma Mélélat, born in Warsaw in 1929. But she did not pass the language to her son, because she wished for him integration and assimilation, linked to the need of putting in distance her pains, particularly the fact of being a hidden child and the vanishing of almost all her family. We can ask ourselves if it’s not the absence of transmission that pushed Denis Cuniot on the path of klezmer music (“Kli-Zemer”, literally instrument of the voice, of the singing), in order to compensate this absence. A music for people to hear Yiddish, without pronouncing it…Main contributions to klezmer music and Yiddish musical culture

In 1984, he creates with Nano a musical show Notes de voyages, Voyages de notes based on a story of Chelm : When Shlemiel goes to Warsaw, known also under the name Gueitzel le curieux. With this story, he discovers the genius of Yiddish literature, and meets several Yiddish teachers in order to get the translation.

After leaving this band in 1998, he creates Les rendez-vous au métro Saint Paul, based on the short stories by Cyrille Fleischman, a solo performance where he is storyteller and piano player.

In 2000, with the young virtuoso clarinet player Yomguih (or Yom) he creates a duo and records the disc The Golem on the Moon.

One must notice also that in 2005, he takes part in the creation of the Klezmer Brass Band of Ile de France Regiongathering more than 40 musicians, amateurs and pros. The repertoire is constituted of klezmer music and Yiddish songs.

In 2007, his disc Confidentiel Klezmer will know great success from the public and the press.

With Bruno Girard in 2008, he creates the duo YAT, Yiddish Atmospheric Touch, which is dedicated to Yiddish songs. Their first CD Mir Geyen in which we can hear the song Brooklyn by the sea by Mort Shuman, translated in Yiddish, is released in 2011.

In 2012 is released his second solo disc, Perpetuel Klezmer.

In 2013, he creates a duo with David Konopnicki on the electric guitars, and pays tribute to todays composers of klezmer music, in particular in France and the United States.

In 2014, to celebrate his 30 years of implication in Yiddish culture and klezmer music, he performs a 6 hour long concert: the Râga Klezmer with a repertoire going through two centuries of klezmer music.

In 2016, he receives the Max Cukierman Prize for his contribution in Yiddish culture