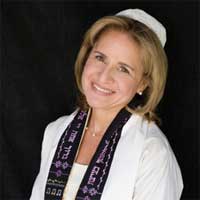 Cantor Deborah Katchko-Gray grew up in a distinguished family of cantors. She is a fourth generation cantor and the second woman to serve a Conservative congregation. Deborah founded the Women Cantors’ Network in l982 to help share the love of cantorial
music she grew up with. The WCN has grown to 300 members from 5 countries and 32 states.

At Boston University her studies with Elie Wiesel convinced her that continuing in this family tradition was the best response for Jewish survival. Elie Wiesel said of her, ”If a teacher had only one student, you, it would be Dayenu!”

Since 1999, Deborah has served Temple Shearith Israel in Ridgefield, CT and is active in the greater community. She has developed musical and educational programs for National Hadassah, UJC Speakers Bureau, CAJE, Chautauqua Institution, and the Wexner Foundation. She was selected as a Teaching Artist for the Connecticut Commission on the Arts, and is on the roster of the UJC Speaker’s Bureau as well as the Fass Speakers Bureau in NYC.

Her recordings include Kindersongs, Jewish Soul and A Sacred Spirit. The Cantors Assembly Spirit Series has used her recordings in the Spirit of Israel, Spirit of Hanukkah, and Spirit of the Jewish Wedding cd series. Her rendition of Yerushalayim Shel Zahav was selected for The International Jewish Songbook recording from TARA publications. Her cds are heard on Jewish radio stations throughout the country and are available at cdbaby.com, oysongs.com and tsiridgefield.org. Jewish Soul was reviewed by the Jewish Week and received four stars!

Deborah’s story is included in The Invisible Thread- A Portrait of American Jewish women. She also teaches huck embroidery for tallitot and is an amateur cellist with a Cello Quartet and the Fairfield County Symphony Society.

Elie Wiesel had this to say about Deborah’s voice- ”Listen to her. Debbie will enable you to hear and feel the exquisite yet melancholy beauty of Jewish melodies that must never be forgotten.”

She is the mother of four sons and stepmother of three sons. She is married to Dr. F. Scott Gray of Connecticut Family Orthopedics and the Danbury Foot and Ankle Center.