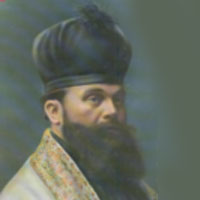 David Roitman (1884–1943), “the poet of the pulpit,” was one of the leading virtuoso cantors of the Golden Age of Hazzanut in America, celebrated equally for his vocal artistry along classical lines and his quintessentially eastern European improvisatory approach. He was also noted for his ability to fuse the musically cultivated and vocally schooled art of cantorial performance with the craft of the skilled ba’al t’filla (lay precentor or cantor)—a craft that involves the artful manipulation of the nuances of an intricate modal system of patterns, formulas, and prescribed motifs for rendering the liturgy. This canonized system is rooted in centuries of practice and refinement (nusah hat’filla, or the “accepted, historically established way or manner of liturgical rendition”).

Roitman was born in Derezinke, a village in Russian Podolia (now Ukraine). At the age of twelve he became a m’shorer (choral assistant) to the shtot hazzan in Lidvinke, where his family had relocated. The shtot hazzan (community or city cantor) was either a quasi-official post—or was perceived as such—in many eastern European cities, or it was the position of cantor at a particular synagogue known as the community or city synagogue (shtot shul). His parents were soon approached by a well-known cantor from Odessa, Yankel Soroker—who was then the shtot hazzan in Uman, the Ukraine—with an invitation for the young Roitman to be apprenticed to him.

The choral apprentice system at that time was a typical path for young Jewish boys in whom serious vocal talent was recognized early on. In some respects it amounted analogously to a “Jewish version” of the Christian church boy choir schools, long established in western and Central Europe and in England. In those eastern European cantorial apprenticeships, the boys provided the needed voices for the synagogue choirs, and in return they received musical and vocal tuition from their cantors and choirmasters.

In the more liberalized khor shuls (choral synagogues) in cosmopolitan cities, some degree of general education was, in all likelihood, also organized for boys from out of town. Although choirs on one level or another were almost always an inseparable component of cantorial art and rendition in all eastern European (indeed all Ashkenazi) synagogues, the khor shul as an institution represented the epitome of an eastern European brand of modernity and westernization—often a reflection of educated middle- and professional-class tastes and expectations. Although the khor shul may have been more liberal in overall outlook, it cannot be described as “nonorthodox.” That very terminology implies institutionalized divisions and theologically driven “movements” that were not part of the conscious experience of that world. In its aesthetic parameters, the khor shul might be considered the nearest counterpart to modern German orthodoxy. Roitman’s parents accepted Soroker’s proposition. Thereafter, apparently in growing demand, Roitman was apprenticed in succession to other cantors, and in one instance he was the subject of a bitter dispute between two of them (not an unknown occurrence in that milieu) that had to be adjudicated by a rabbinical court. Eventually he was apprenticed to the legendary cantor, composer, and choirmaster Zeidl Rovner (Jacob Samuel Maragowsky, 1856–1943), who, together with his renowned traveling choirs, was famous in religious circles across eastern Europe—and later in America, following his own immigration.

Beginning at the age of twenty, Roitman held cantorial posts at several synagogues in the Ukraine, the Caucasus, and Vilna, and in 1912 he was appointed to the coveted cantorial post in St. Petersburg, where, for the next five years, he achieved great artistic success and personal fulfillment in the prosperous and highly cultivated Jewish community there. The future cantorial star Pierre Pinchik, who succeeded Roitman in St. Petersburg after the city was renamed Leningrad, said that Roitman was considered Europe’s leading cantor of that period. The synagogue was (and is) located near the opera house (the Maryinsky Theater) in St. Petersburg, and Roitman formed collegial associations with such reigning operatic luminaries as Chaliapin, Sobinoff, and Battistini—some of whom visited the synagogue on occasion to hear him.

Roitman also turned seriously to cantorial composition. His recordings from the Vilna and the Petersburg years circulated in Europe, although most of them remained unknown to American audiences even after his immigration to the United States, and they were at most collectors’ items until archival rereleases in the 1970s. They demonstrate Roitman’s trademark gifts for free, improvisatory virtuoso hazzanut and florid recitative delivery, but they also exhibit his mastery of a learned cantorial style, his comfort with the more restrained ambience that generally prevailed in the westernized format of the khor shul, and his artistic familiarity with certain composers particularly associated with khor shul repertoire, such as Abraham Moshe Bernstein (1866–1932) from the Russian-eastern European orbit, and Louis Lewandowski (1821–94) from the German synagogue orientation. That aspect of Roitman’s composite art was less evident on his widely disseminated American recordings.

Following the October Bolshevik Revolution in 1917, in Roitman’s own description, his cantorial pulpit “slid from under his feet,” and he felt that the community “fell apart.” He went to Odessa, where he remained for three years with the hope of returning one day to St. Petersburg. During that period he is said to have written one of his most famous compositions, Rahel m’vaka al baneha (Rachel Weeps for Her Children), a setting of a passage from the Book of Jeremiah. That piece—his most recorded one—became known in America even before its composer was, because the world-renowned cantor Yossele [Joseph] Rosenblatt recorded it prior to Roitman’s immigration, inadvertently without attribution. (Rosenblatt subsequently published an apology in the American Jewish press, and the two became close friends.) As Jewish refugees from the effects of the Revolution and the aftermath of the First World War streamed into Odessa, its communal as well as economic situation worsened, and even Roitman was unable to secure full-time employment. He and his family left for Kishinev, Bessarabia (then part of Romania), where he officiated at its principal synagogue and then decided to emigrate to America.

Roitman arrived in the United States in 1923. “When the striking figure of Cantor David Roitman first appeared in New York,” wrote a well-respected American critic and observer of cantorial personalities, “the world of American Jewry discovered a new giant of song.” After two years at Congregation Ohev Sholom in Brooklyn with the esteemed choral conductor Leo Low, he became the cantor of New York’s Shaarei Zedek synagogue—”home” to a succession of star cantors, including Moshe Ganchoff, Moshe Taubé, and Pinchik. Except for a two-year interruption during the Great Depression when the choir was suspended for economic reasons (no serious cantor could or would function without a choir then), Roitman served Shaarei Zedek for eighteen years, until his death. He also made extensive concert tours of Europe and South America, as well as throughout the United States and Canada.

Among Roitman’s important compositions, in addition to his setting of Hayyom t’amtzeinu, recorded here, are Av harahamim, Ashamnu, and many recitatives—some of which were edited by Lawrence Avery and published posthumously (1961), and others that remain in manuscript. Though Hayyom t’amtzeinu represents only one side of Roitman’s style, its lighthearted, spirited quasi-Hassidic character illustrates Zeidl Rovner’s lasting influence on him. (Rovner’s compositions always bore the flavor of the Hassidic melos in which he had been immersed as a youngster.) The orchestral treatment of this rendition removes it entirely from the realm of worship and casts it into the concert format. But solo or with a cappella choir, the basic melody and its well-crafted extensions and development could serve as well in the natural environment of a traditional synagogue service. Hayyom t’amtzeinu, which occurs on Rosh Hashana and Yom Kippur toward the end of the lengthy mussaf service, has historically been sung to vivacious or dance-type tunes such as this throughout Ashkenazi practice in various traditions—including western traditions that retain a more sober character for the bulk of the preceding liturgy, to which livelier melodies offer a counterbalanced conclusion.