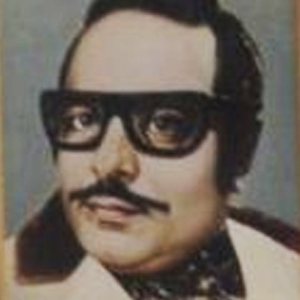 Born in Vilna, Lithuania, David Rogow started performing in theatrical productions while attending the Real Gymnasium. He then went on to act in the troupe Davke and in the Yiddish marionette group Maidam. Rogow survived World War II in Russia; soon after the war, he started acting in Yiddish theater again, along with his wife, Nina, in German displaced persons camps.

In 1947, Rogow acted in Munich’s Yiddish theater. Three years later, he and his family left for New York. He joined Maurice Schwartz’s Yiddish Art Theater, where he performed, among others, the role of Nokhemtshe in I.J. Singer’s “Yoshe Kalb.” He played key roles in a number of productions at the Folksbiene Yiddish Theatre (now known as The National Yiddish Theatre – Folksbiene). Rogow was an accomplished reciter of Yiddish prose and recorded a several literary classics. He worked for many years at the YIVO Institute for Jewish Research and as a researcher on the Great Dictionary of the Yiddish Language. He died on April 17, 2007