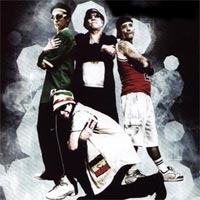 Who is Chutzpah? Chutzpah – the first ever Jewish Hip Hop Supergroup – have been together, on and off, for as long as anyone can remember. Brought together by the magisterial Dr. Dreck, a profoundly influential figure in the annals of Hip Hop, the trio consists of Master Tav – the lead rapper, MC Meshuggenah – the slightly unhinged one, and their tag along fourth, Jew Da – the Jewish/Rastafarian, toaster/philosopher. Chutzpah’s worldwide debut release, “Chutzpah (eponymous)” hits the streets in early November. Their holiday video “Chanukah’s da Bomb,” along with a ‘making of…’ video called “Chutzpah this is?” will also be made available as a DVD. Which brings us back to the question of who they are… Dr. Dreck: Reports that he invented scratching on a Victrola in 1948 have never been substantiated, but since that was the year after his Bar Mitzvah, it’s just possible enough to be true. His contributions to the growth of the movement have been significant. He claims that Dr. Dre came along, took his name and dropped the ‘ck’.

His mysterious connection to actor George Segal has only fanned the flames of mystery surrounding the group. Master Tav: He was still a sincere cantorial student when Dr. Dreck saw his potential and encouraged him to try his hand at rhyming. Tav took to it like a duck to water and soon left his studies to pursue a recording career. He developed his signature style of fast and fluid rap, honing it to perfection with the encouragement of his mentor. Now, in a classic case of the student surpassing the teacher, Master Tav has become the driving force and creative center of Chutzpah. MC Meshuggenah: He’s literally the wildcard in the group. He has been cared for by Dr. Dreck since, at a very young age, it became apparent that his parents couldn’t handle his erratic behavior. Having been raised by a DJ like Dr. Dreck, he has an almost inborn sense of rhythm and rhyme.

His love for being the center of attention has occasionally derailed the recording process, but Tav and Dreck have both assured us that he is OK to tour, and his medication doses are being closely monitored. As is often the case with influential artists, their own road has been a bumpy one. From crises of faith (Master Tav), and steady acting engagements (Dr. Dreck) to the occasional stay in a psychiatric hospital (MC Meshuggenah) the group has encountered numerous obstacles. Finally, the now legendary demos they recorded over the years reached the ears of David McLees, the President of a new Jewish record label, Jewish Music Group, and Chutzpah was signed! The wait is over. The band will be touring in support of their release.