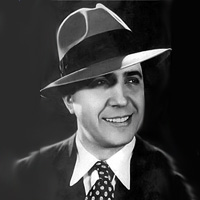 Carlos Gardel (11 December 1887/1890 – 24 June 1935 Medellín, Colombia) is perhaps the most prominent figure in the history of tango. Although his birthplace is disputed between Uruguay and France, he lived in Argentina from the age of two and acquired Argentine citizenship in 1923. He grew up in the Abasto neighbourhood of Buenos Aires, located near the Central Market of Fruit and Vegetables, an enormous art-deco styled building which today is a shopping mall. He attended Pio IX Industrial high-school located in the Almagro neighbourhood. He died in an airplane crash at the height of his career, becoming an archetypal tragic hero mourned throughout Latin America. For many, Gardel embodies the soul of the tango style that originated in the barrios of Buenos Aires at the end of the 19th century. He is commonly referred to as “Carlitos”, “The King of Tango”, “El Mago” (The Magician) and “El Mudo” (The Mute).

Gardel began his singing career in bars and at private parties, and sang with Francisco Martino and later in a trio with Martino and José Razzano. Gardel created the tango-canción in 1917 with his rendition of Pascual Contursi and Samuel Castriota’s Mi Noche Triste. The recording sold 10,000 copies and was a hit throughout Latin America.

Gardel went on tour through Argentina, Uruguay, Chile, Brazil, Puerto Rico, Venezuela, Colombia, and also made appearances in Paris, New York, Barcelona and Madrid. He sold 70,000 records in the first three months of a 1928 visit to Paris. As his popularity grew, he made a number of films for Paramount in France and the U.S. While sentimental films such as El día que me quieras and Cuesta abajo lack lasting dramatic value, they were outstanding showcases of his tremendous singing talents and moviestar looks.

In 1915 Carlos Gardel was supposedly wounded after being shot by Che Guevara’s father, Ernesto Guevara Lynch, as a result of a bar room brawl in the belle epoque Palais de Glace in the Recoleta district of Buenos Aires, although different versions assert that he was shot in the chest or in the leg, yet another variation holds that it was not Che’s father but rather Roberto Guevara, an upper-class boy often involved in quarrels.

Gardel died in 1935 on an airplane crash in Medellín, Colombia. Le Pera, two of their guitarists (Guillermo Desiderio Barbieri and Ángel Domingo Riverol) and several business associates and friends of the group died in the crash as well. It is believed that a third guitarist, José María Aguilar, died a few days after the crash. Others state that Aguilar lived until 1951, although he never regained full use of his hands and sight.

Millions of his fans throughout Latin America went into mourning. Hordes came to pay their respects as his body was taken from Colombia through New York and Rio de Janeiro. Thousands rendered homage during the two days he lay in state in Montevideo, the city in which his mother lived at the time. Gardel’s body was laid to rest in La Chacarita Cemetery in Buenos Aires. In the neighborhood of Abasto, Buenos Aires, in the house where Gardel lived with his mother, the Carlos Gardel Museum opened in 2003.

Gardel is still revered from Tokyo to Buenos Aires. A popular saying in Latin America, which serves as a testimony to his long-lived popularity, claims, “Gardel sings better every day.” The fingers of his life-sized tuxedo-clad statue on his tomb nearly always hold a burning cigarette left by an admirer. Another commonly used phrase in Latin America, which asserts that Veinte años no es nada (Twenty years is nothing), comes from his song Volver.

During 2009/2010 statues depicting Gardel are scheduled to be erected temporarily throughout twenty-five small villages and towns of Scotland, commemorating his tour of 1930 where the singer used funds from his well paid appearances in Glasgow and Edinburgh to subsidise small unannounced concerts in rural venues. These impromptu (and free) appearances endeared him to the working population of Scotland and his legacy of passion and art endure through regular commemorative concerts and amateur productions. However the tour is a stunt carried out by performing arts company Mischief La Bas.

Birthplace controversy
The place of Gardel’s birth is a matter of considerable controversy that still provokes passionate debate in Uruguay and Argentina.

During his life, Gardel declared in several occasions being Uruguayan, born in Tacuarembó. After his death, his legal representative, Armando Defino, produced a handwritten will, which he assured was written by Gardel himself, claiming he was born in Toulouse, France, to Berthe Gardès (1865-1943), and baptized with the name of Charles Romuald Gardes. It is not known who Gardel’s father was. Due to the fact that this will was officially considered authentic by the Argentinian law, Berthe Gardes (and, after her, Defino himself) received Gardel’s inheritance. There is an original birth certificate of a child born in Toulouse to Berthe Gardès on December 11th, 1890. There is no other evidence (except for the handwritten will) linking this child with the singer. The will was controversial due to the lack of previous notice that Gardel had any relationship with France whatsoever. He never declared or suggested that during his life.

A different line of research (Payssé González: “Gardel. Páginas Abiertas”, 1st. ed. Montevideo, 1990, 3rd. ed. Montevideo, 2002; Ostuni, “Repatriación de Gardel”, Buenos Aires, 1997; Bayardo, “Carlos Gardel: A La Luz De La Historia”, Montevideo, 2000) claims that Gardel was born Carlos Escayola Oliva in the rural estate (“estancia”) of Carlos Escayola Medina, in the Uruguayan department of Tacuarembó. Gardel obtained his first official identity document (“Constancia de nacionalidad”) in Buenos Aires on October 8th, 1920. There, Gardel claims being Uruguayan, born in Tacuarembó to “Carlos and María, deceased”. All the following official documents issued to Gardel certify he is Uruguayan. They can be seen here: http://www.montevideo-tango.com/mvdt/Gardel.htm. There is speculation that Gardel gave Tacuarembó as his birthplace to evade military service during World War I for his native France. Nevertheless, World War I ended in 1918, and this document was issued in 1920. It has been proven by Paysse Gonzalez (2002) and Bayardo (2000) that French law did not enforce military service to the sons of widows resident abroad.

When asked about his nationality, Gardel would repeatedly answer he was Uruguayan, born in Tacuarembó. To the periodical “El Telégrafo” (Paysandú, Uruguay, October 25th, 1933) he declared: “I’m Uruguayan, born in Tacuarembó” [“soy uruguayo, nacido en Tacuarembó”]. In June’s 1935 issue of “Caretas” magazine of Antioquia, Colombia, Gardel declared: “Mi heart is Argentinian, but my soul is Uruguayan, because there is where I was born“ [“Mi corazón es argentino, pero mi alma es uruguaya, porque allí nací”].