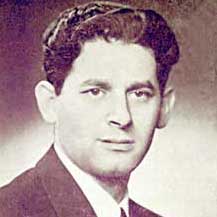 Moshe Schwimmer was born with the gift of a beautiful singing voice. As a child his singing delighted all who heard him. But, being a serious and studious young man, he desired to develop his talents through study and hard work. And so, at the age of 18, he set out to study music and liturgy at the Brunn Music Conservatory in Czechoslovakia (now Austria).

Inside the conservatory he was welcomed into the cantor’s choir. His knowledge of liturgical music grew and his rich baritone voice became polished and more defined. Outside the conservatory Hitler was on a rampage. Sadly, the synagogue in Brunn was torched and burned by the Nazis. Moshe was determined to increase his skills. He fled to Budapest where he continued to study, created the OMIKE performance group, and gave concerts, until the Hungarians sent him to a forced labor camp and then to a concentration camp.

After his liberation in 1944, he appeared throughout Eastern Europe, but it was not until his travels took him to Germany that his talents were truly recognized. He was invited to sing for the state-run radio station in Munich. Soon he had his own hour-long weekly radio program which was broadcast all over Europe.